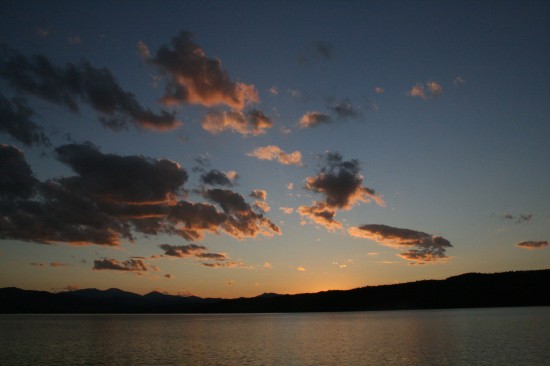 As I thought about the summer of 2012, I thought back to my reflections on the summer of 2011, 2010, and 2009.  This is my favorite season, though also one heavy with melancholy.  I noted last year that the only seasonal change I don’t lament, on some level, is winter to spring.  Because after that I’m aware that we are turning towards the end, the darkness, the cold.  There comes a moment in each summer when I sense fall underneath all the sun and heat and laughter; usually it’s somewhere in the end of July.  And then comes August, an elegaic season that is at once the fullest manifestation of summer and its end.

This summer was full of joys.  I saw first-hand the power of tradition.  Certain events are now carved into our family life as important rituals.  We started off by going to Storyland on the last day of school.  The kids are getting old for Storyland, but they love the tradition as much as I do, and embrace the way it marks the beginning of summer vacation.

Grace was recovering from her broken collarbone in June, so Matt and Whit went alone on the fifth-annual White Mountains overnight trip.  We visited our dear friends in Martha’s Vineyard and had a wonderful, albeit short weekend.  Grace went back to sleep-away camp and loved it, cementing her bond with my best friend from camp’s daughter.  I don’t have words to express what it’s like to watch this second-generation friendship flower.

We spent the Fourth of July with my family, happily welcoming home my sister, her husband, and her daughters from Jerusalem.  We watched the parade, played in the back yard, swam out to the raft, and jumped off the boat into the ocean.  It was a very, very happy week.

The summer wasn’t all re-treads of previous years, though.  That’s the beauty of rituals, I think: they are a framework around which you can build lots of new experiences.  Several times, Grace, Whit, and I woke up early and went to Walden Pond to swim.  Each time we were among the only people there, in a place whose magic is palpable to both the children and me.

Around Memorial Day we started the License Plate Game.  We wanted to see all 50 state license plates.  I printed out a list, put it on the fridge, and the children got really into it.  We were down to four by the beginning of August, and we knocked three of those (Hawaii, Nebraska, and Wyoming) out in California.  Alaska eludes us as of this writing.

We listened to a lot of Phillip Phillips’ Home, and the Mumford & Sons cover of The Boxer, and Katy Perry’s Wide Awake, and Willie Nelson singing Coldplay’s The Scientist, and to a few songs from the soundtrack of Brave.

I read a lot.  I absolutely adored Wild by Cheryl Strayed, The Age of Miracles by Karen Thompson Walker, and The Light Between Oceans by M.L. Stedman.  These three are among the most lovely books I’ve read in a long time.  I also loved The Rules of Inheritance by Claire Bidwell Smith, I Couldn’t Love You More by Jillian Medoff, Light Years by James Salter, Before You Know Kindness by Chris Bohjalian.  I read lots of other books, mostly fiction.

We are deep in the happy hours, as Glenda Burgess wrote in her gorgeous memoir The Geography of Love.  I know these hours won’t last forever, and I am trying to sink as deeply into them as I can.  One thing I know is I can’t make them stay, so at least let me pay attention to them while they’re here.