Saturday was an absolutely perfect day.  Cloudless sky, 75 degrees.  I took Whit to soccer and then he and I joined Matt on the sidelines of Grace’s game.  She had only been on the field for a few minutes when she took a simply heroic fall.  She literally went flying through the air before crumpling to the ground on her left shoulder.  There was an audible gasp.  And then, worse, she was slow to get up.  All the players on the field sank to their knees.  I watched her coach approach and ask her if she wanted to keep playing, watched her shake her head, and watched her walk off the field next to him with her head bowed.  I purposely didn’t rush over to where she sat with her coaches and team on the other side of the field.  I felt like I should stay out of the way.

But at half time, Matt and I went over, and Grace was in quiet tears, holding a tiny bag of ice to her shoulder (one of her teammates had scooped a few ice cubes out of her water bottle and put them into the bag that had held the snack apples, a detail that charmed me).  I immediately announced I was going to take her to the ER for x-rays and neither coach fought me.  Yes, that makes sense, they nodded.  The whole way to the hospital, she cried softly.

After a long wait they finally put us into a room and I helped Grace change into a johnny and lie down on the gurney.  “Will you lie with me, Mummy?” she asked plaintively, and I did.  I curled my body around hers and rested my chin on top of her gold-streaked brown hair.  She whimpered quietly, and I could tell she was in a lot of pain.

“You’ve broken bones too, right, Mummy?” she said suddenly and I smiled in spite of myself.  For years and years I’ve maintained that if you haven’t broken any bones you’re “not trying hard enough.”  This is an obnoxious thing to say, I realize, and I think mostly I’m trying to explain to myself why I’ve broken one ankle, one arm (both bones, both compound fractures), three ribs, and assorted fingers and toes.

“Yes.  I’ve broken a lot of bones.  Unfortunately I think getting hurt is part of the deal.  It’s going to happen sometimes when you do sports.  I’m pretty sure there will be more injuries to come in other games.  And in general, in life.”  I hesitated.  “But I promise,” I blinked back the tears that sprang to my eyes.  “I promise you it’s always worth it to play.” 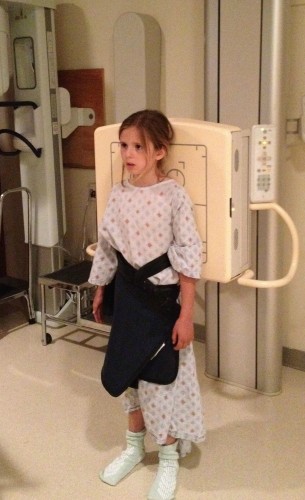 We lay there quietly for a while.  Then it was time for x-rays.  She was very freaked out by being alone in the dark room, by the lead apron, and by the big machine aimed at her shoulder.  By the time we were finished there she was weeping in my arms again.

Then we went back to the room and onto the gurney.  It was quiet in the ER on a gorgeous Saturday afternoon, and I could hear our breathing.  “Mummy, you know what?”  Grace turned her head slowly to look at me.  “This is like when I had something in my eye the other day.”  (After a protracted effort to get an eyelash out of her eye, she had been in real pain for hours; my guess is that she somehow scratched her eyeball).  “You know, I realize how much I’ve been taking for granted all along.”

I tried hard not to cry.  I looked right in her mahogany eyes, nodding, biting my lip.  I felt the feathers of holiness brush my cheek, the sensation of something sacred descending into the room, as undeniable as it was fleeting.  There have been a few moments like this in my life – more than a handful, but fewer than I’d like – when I am conscious of the way divinity weaves its way into our ordinary days.  This was one.

That night when I tucked her in her arm was propped on a pillow pet and her eyes were wary.  She was very worried about rolling over and injuring herself more in her sleep.  I smoothed her hair back from her forehead and kissed her cheek, murmuring again how proud I was of her and how brave she had been.

“Mummy, I just want to say thank you again.” With her good arm, she clutched her teddy bear to her chest as she spoke.

“Thank you for being there with me all day.  For always being with me.”  Her eyes brimmed and mine did too.  I hugged her because I didn’t have words to express what I wanted to say.  Which is that there’s nowhere I want to be but right here with her.  That I don’t want to miss a single second of this season of my life, or of hers.

17 thoughts on “It’s always worth it to play”