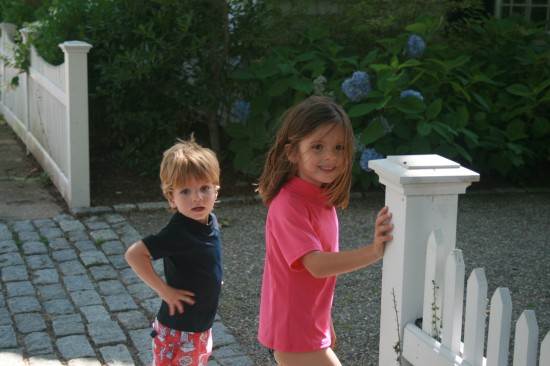 How is it possible that this picture was taken five years ago?  August, 2008.  My teachers in swimwear.

It’s not a secret that I used to scoff when I read or heard people proclaim that their children were their “greatest teachers!”  Whatever, I used to whisper under my breath.  How is that possible?  But as has been the case with most of my firmly-held beliefs, the universe has proceeded to show me that my certainty is both wrong and a little bit arrogant.

By some combination of years and the maturation of both my children and me, or probably mostly through the alchemy between those things, I’m now glad to say that I have learned an enormous amount from my children.  There’s no question, in fact, that they’ve taught me and changed me more than any other human – any other factor, actually – in this life.

First and foremost, they have entirely reconstituted the way I relate to the world.  I used to be in a rush for the next brass ring, certain that wherever I was headed at high speed would hold the answers to all of my overwhelming questions.  That approach collapsed in somewhat grandiose fashion in my early 30s and now I view the “prize” as existing right here, under my feet.  Furthermore, I know that the questions are permanent and the answers evanescent.  Paradoxically, children are the most stubbornly here-now creatures in the world and simultaneously the most unavoidable reminders of how fast life passes.

A few years into parenting, realizing I was watching my children grow before my eyes, I was struck dumb by how bittersweet being a mother was.  I had not anticipated the heartbreak it entailed.  The passage of time took a seat at the table of my soul and refused to get up.  As Grace’s pants grew too short and Whit’s shoes seemed too tight overnight, I was unable to ignore the incessant turning forward of my days.  I took pictures constantly.  I wrote letters to each child on their birthdays.  I started blogging to record the little moments of everyday life that I knew I’d forget.  Were all of these attempts to memorialize my days, like insects frozen forever in amber?  Or were these actually efforts to better inhabit these days, because I realized quickly the details only really revealed themselves when I was paying attention?

I’ve decided it was the latter.  Being Grace and Whit’s mother has taught me how I want to live in this world.  It is nothing less than that.  I have learned to look at the light of this hour, and now that I can see it, I refuse to look away.

But I have learned other things, too.  Grace has taught me about the power that passion has to light up a life.  Watching her fierce attachment to and fascination with animals has made me realize viscerally something I’ve always known intellectually, which is I didn’t have that kind of animating interest in my childhood.  I still don’t.  And I wish I did.  The arrival of a dog causes genuine delight for her, she devours books on all kinds of animals, and farm camp’s barnyard chores were one of her favorite things this summer.  She has shown me something else I’ve sensed but never been able to articulate, which is that deep sensitivity can be both blessing and burden.  When I watch her ascertain the mood of a room without any formal input I can see her empathy rise to the surface.  Like a heat-seeking missile she often goes right to the person who needs her the most.  I’ve also seen the ways this sensitivity can gouge her when it’s turned inward, when she takes things to heart that don’t deserve that or allows people without kind intentions close to her.

From Whit I have learned a great deal about how the world responds to warm and outgoing people.  He is often my front man.  He is not shy in the least.  And through watching how people interact with him I’ve learned how the opposite approach (which is my default) can seem cold and aloof, distant and unfriendly.  Now and then I take a deep breath and try to plunge into a conversation with a smile, and I swear that I always think: “what would Whit do here?”  He has taught me about the ways that humor can soothe and distract, and that it is often the very best way to change the energy in a room.  He too has shown me the way true passion can manifest: the boy is a natural-born engineer, and is constantly fiddling with Legos.  He’s now brought them into the bathtub.  I’m certain he dreams in Legos.  It’s just one way that his 3D orientation to the world shows up.

I’ve learned the hand gestures to a song about llamas, who Geronimo Stilton is, and the importance of having putty to play with while you work at school.  I’ve discovered that I love Bugles, ridden a roller coaster for the first time, and learned the profound peace that can come with curling up with a child in a twin bed at bedtime, simply to be together for a few minutes.  I’ve learned the lyrics to more Taylor Swift and Katy Perry songs than I can count, what purpose all those hockey pads serve, and that there are three sizes of soccer ball.

There is so much more I could say, but even writing this has made me think about how perhaps this realization comes equally from an orientation towards gratitude as it does from one towards noticing.  And that simply takes me back to where I began this post, to the most essential thing I have learned from Grace and Whit: being aware of and thankful for all the details of this ordinary life of mine.

33 thoughts on “What they’ve taught me”