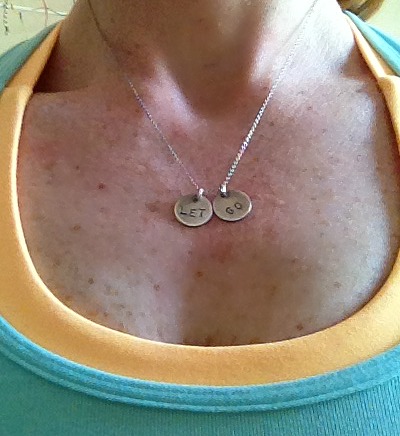 I adore this piece about 15 Things You Should Give Up to be Happy.  Loved.  And it made me think of how often I write about letting go.  I write about it a lot.  A search for “let go” in my archives yielded 26 pages of results.  I could do a favorite-posts-post JUST of “let go” posts.  But I won’t.  Right now, at least.  I do wear a necklace that says “let go” which probably tells you a lot about how much this phrase means to me.

Maybe that’s actually what this life is all, and essentially, about.  Is that possible?  Just letting go of things, releasing, letting ourselves float through life as lightly as the spring petals fluttering to the ground, dying as they go, but beautiful?

So much of this modern life seems about holding on and grabbing.  It is true when it comes to material things, and I already know I have an aversion to this, to the the piling-up of possessions.  That letting-go I have already done: the illusion that there is any deep, true contentment to be found in things.

But this orientation towards acquisition also applies to more abstract things, and there I’m as guilty as anyone.  I spent the first 30 years of my life madly racking up degrees and achievements and accolades.  In fact my first, rejected memoir was all about that: about the realization that that way of navigating the world is fundamentally broken.  When there is no next obvious brass ring to grab for, what do we do?  Well, fly into the abyss is one thing.  But as we fall, we need to figure out another map to follow, one less defined by external validation and achievement and more delineated by the internal voice of our soul.  That letting go I am working on, though I think I’m moving towards it.

But there’s a third way I – and we – lean towards holding on, and that is the trickiest one for me.  It’s the letting go of what we thought our life was going to be.  That is inextricably correlated, for me, with letting go of my grief about the passage of time.  I’m not sure I’ll ever be able to fully release that, but I know that right now I’m bound in its net, tangled in the cords of sorrow that tighten around me every time I kick.  My life is exactly as I planned it and nothing like I expected.  That sentence, which I use over and over again is fundamental, painful, and true.  What I have is here.  Now.  And to really live it, I have to let go of my white-knuckle grip on both yesterday and tomorrow.  That letting go: still a long, long way to go.

As firmly as I know I need to let go, as fiercely as I’m convinced that that is the lesson I was put on earth to learn, I know I am also, simultaneously, incredibly attached.  I am attached to people, to places, to outcomes.  In fact I’ve often questioned the whole notion of hope, because it is very hard for me to feel hope in the abstract.  It always comes wound around a specific future or thing that I want to be true.

I have said before and still believe that almost all suffering comes from our attachment to how we thought it was going to be.  But I don’t want – and I don’t think I could, anyway – to be less attached to those I love.

Maybe I can parse attachment, and divide it carefully into two groups, the way Grace painstakingly divides her Perler beads by color.  Let go of what I thought life would be like?  Absolutely.  Yes.  I must.  Let go of those I love?  I don’t think so.

What are you letting go of right now?  Do you think it’s possible that learning to let go is life’s basic and most important task?