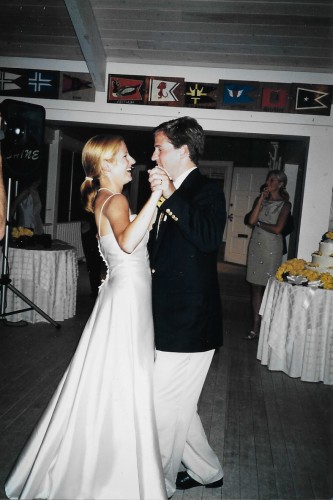 How is it possible?  Fifteen years went by in a blink.

The years have been turbulent and placid, full of adventure and calm, one house, two children, visits to four continents, and over 50,000 digital photos.  We’ve had bad luck both hilarious and terrifying, cars totalled by falling trees that were struck by lightning (true) and children having anaphylactic reactions to nuts (also true).  We’ve also had extraordinary, miraculous luck, in the enormous form of a heart transplant but also in tiny ways every day.

We summitted Kilimanjaro together within six months of meeting, but as the minister said on our wedding day, Kilimanjaro is nothing compared to marriage.  And he was right.  It’s been a walk both more difficult and more breathtaking than I could possibly have imagined.  Our ascent of Kilimanjaro was marked by a golden late afternoon in the sun where you washed my hair for me and a long, slow slog to the top in a white-out blizzard.  Both of those experiences in a single week, along with more than I can count along the spectrum both meteorological and emotional.

I look at this picture and I’m struck by the palpable joy, by the deeply familiar place (we still go there most weekends of the summer, and each time I walk through this space I stop and remember the strains of Maybe I’m Amazed and this exact moment), and by how young we both are.  Young and optimistic and hopeful.  Fifteen years have sanded the rough edges off of us, there’s no question about that, as well as allowed some of our tendencies to harden into traits.  I hope there’s been more gentling than hardening.  Honestly, I think that’s a good a wish for a heading-towards-long marriage as I can think of.