I think anyone who’s been reading this blog knows how profoundly touched I was by Devotion, Dani Shapiro’s memoir that came out this winter. I was very privileged to meet Dani at a couple of her readings this winter; she is everything in person that you’d imagine from her graceful, honest memoir, and more. Devotion has stayed with me months after I finished it, its lines presenting themselves fully-formed in my head, its lessons growing ever more compelling and wise, its elegant language prompting me always to try to write more carefully, more lucidly. Dani also has two fantastic blogs, both of which I now eagerly follow.

One reason I identified so strongly with Dani from the start is because she is clearly interested in the central issue that preoccupies me now: presence. In both her memoir her blogs she wrestles with questions of how to be more engaged in her life, less distracted, better able to live within the shadow of time’s relentless passage. These are all questions I struggle mightily with, daily, and I have already learned so much from Dani’s writing about them.

You can imagine how elated I was when Dani agreed to participate in Present Tense! There aren’t really superlatives strong enough to describe how my I admire Dani, so I’ll just say she’s both a role model and an unwitting teacher. Thank you. 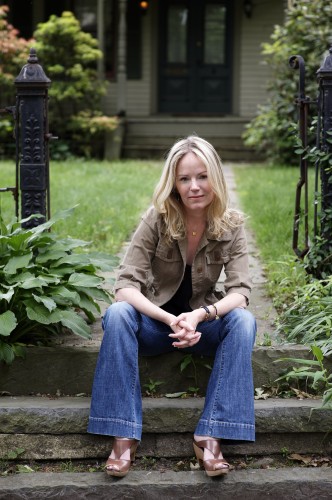 1. When have you felt most present? Are there specific memories that stand out for you?

When I think of when I’ve been most present, I think of silence. Of moments of quiet–when I have been with the people I most love, my son, my husband–not necessarily doing anything, but rather, being. I often feel very present, for instance, when tucking my son in for the night, sitting on the edge of his bed in the darkness. Or with my husband, when we have time together to just be, rather than the constant racing that takes up too much of our lives.
Travel, too, pushes me very much into the present. There’s no greater reminder to “be here, now” then the realization of how fleeting the moment is. My family and I take a trip each year to Positano, Italy (my husband and I direct a writers’ conference there) and when I wake up in our darkened room that first morning, then open the shuttered doors that lead to the patio and the view of the sea, the fleetingness of our time there, the way it marks the years passing each March, the place unchanged, us all a year older… there is something so beautiful, so bittersweet about that awareness that I feel pierced by it.

2. Do you have rituals or patterns that you use to remind you to Be Here Now?

Without a doubt, my yoga and mediation practices are my two greatest reminders. They are also, for me, inextricably linked. I don’t know how to meditate without first spending an hour practicing the physical, asana part of yoga. I wish I were able to just plunk myself down and meditate — but I find that I need the preparation of yoga, my body spent, wrung out, before I have any hopes of sitting for any length of time. Of course this means that I need, like, ninety minutes to do it all — which I don’t have every day. But the days I unroll my mat are far better days than those when I don’t get around to it.
3. Do you have specific places or people that you associate with being particularly present? Who? Where? Any idea why?

I completely relate to what you’re saying here, and I’m also still working out why that is — why some people seem to command my full attention more than others. I am most alive, and most myself, and most present, when I’m engaged in genuine conversation. Intimate, real dialogue. Cocktail party chatter, social banter — these make me flee somewhere deep inside myself, I guess because I feel both bored and uncomfortable. I’d much rather talk about something real — and when I do, my attention does not feel split, and I am fully present.
4. Has having children changed how you think about the effort to be present?
Yes, yes, yes! Since the birth of my son, Jacob (he’s now eleven) I have such a strong feeling of wanting to get it “right” — aware of my failings, wanting to do better, be better. Wanting not to miss a single moment, which is, of course, impossible — but desperate not to look back some day and realize that I was racing from one thing to the next and missing the magnificence of his childhood, and of early motherhood. I heard another mother recently say that she realized that the time in the car — you know, that time when you’re often racing just to get from one thing to the next, late, irritated, attention fragmented — that time actually is the thing. The time in the car. Thinking of the time in the car as sacred has really helped me. I look forward to it now. It’s often where we get our best talking done.
5. And just cause I’m curious, what books and songs do you love?
Oh, where to begin! Books — well, I keep Virginia Woolf’s A Writer’s Diary on my desk at all times, which should tell you something about how I feel about Woolf, generally. I read a lot of my friends and peers — Martha McPhee has a wonderful new novel called Dear Money coming out pretty soon. Jennifer GIlmore just brought out Something Red, which is also terrific, and Jennifer Egan’s A Visit from the Goon Squad is a tour du force. I go back often to Annie Dillard’s work. And for spiritual writing, I read anything by Sylvia Boorstein or Jack Kornfield, again and again. Each re-reading bears new fruit.
********
There is so much in these answers I relate to, Dani. The time in the car, that is the thing. That is motherhood. That is our life. That resonates so powerfully with me, and I too am so often rushing through it. I remember months ago my son went through a phase where he demanded that I buckle him into his carseat, despite very clearly being able to do it himself. For some reason I had the patience, in that phase, to step back and say: pretty soon he’ll never want me to do this again. Let me enjoy the intimacy of those rote movements, of that buckle, buckle, snap. And that – seeing this mundane reality of every day life as, as you say, sacred – helped me hugely.
Your description of accessing a meditative state only through physical exertion is also keenly familiar. I remember this from when I first stumbled into a yoga practice more than 10 years ago. Somehow the exhaustion of the body paves the way for quiet in the brain; I don’t understand the alchemy, but I recognize it as you talk about it.
Similarly, I totally know what you mean about feeling very present as you sit and tuck him into bed. I know that feeling well; sometimes there’s an awareness of the meaning of the moment as I do that, specifically around bedtime, and I feel cracklingly alive, aware of the seconds as they pass, full with my stroking his hair back from his forehead and kissing his cheeks, smelling his just-tubbed smell. Also, when I read with Grace before bed. It is so routine, so regular, but also I know that in the blink of an eye it will be over. And that’s the essence of all of this: how to live in the moment even as we realize it is already dying to us. This is almost unbearably painful, for me at least, when I stop and think about it. Awakening to that has been the task of the last few years for me, the path that I am clearly walking.
Dani, thank you again for holding a light on this path for me and for so many others. Your example, your honest inquiry and willingness to “live inside the questions” makes me feel less alone and less afraid. Thank you.