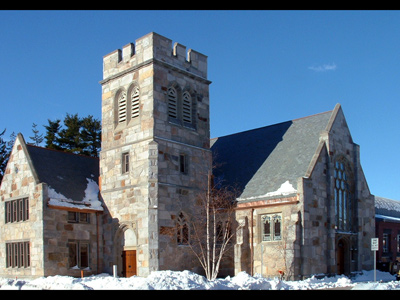 I’ve been thinking today about the places in our lives that hold our rawest and most treasured memories. Sometimes physical space seems so mute, so indifferent; it surprises me that somehow the important moments that have transpired in a place don’t remain there, echoing, animate, alive somehow. Maybe they do. Occasionally, in returning to a place that hosted an important moment in my life, I can feel that moment, hovering, bumping into me, invisible to the eye but not to the spirit.

The Exeter chapel is one such space for me. The chapel was a place that provided solace and comfort during what were rugged and lonely years for me. There were two specific times each week that I went to the chapel, often alone. I viscerally remember walking in the rough stone door, my sadness leaking from me, and sitting quietly in the dark wooden pews.

Each Thursday morning Exeter had a period called “meditation,” during which a member of the faculty, staff, or senior class read a personal essay in the chapel. The tradition was that seniors wrote their meditations in English class and a select few were chosen to read during our senior spring. Mr. Valhouli, my beloved English teacher, was an ardent lover of this tradition and when he read his personal comments in 1991, I was lucky enough to be there.

I’ve often thought that it took guts for a school that is so heavily judged on quantitative measures like test scores and college admissions to defend the value of the personal story with a tradition like this. It has taken me many years to parse through the legacy of Exeter, beyond that most obvious one, Mr. Valhouli’s teaching. The meditation tradition has had a deep impact on me, for the way it privileges the individual telling of experience, for its high valuing of the learning inherent in telling and hearing stories.

The other weekly time I went to the chapel, like clockwork, was Tuesday night’s evening prayer service. This was the exception to the nightly curfew, and at 9:30 (I think) students filed into the chapel, always lit just by candlelight. “Prayer” is a misnomer for this decidedly secular event: someone would perform a couple of songs, acapella or accompanied, and then read poems or quotes. This was probably my favorite half hour of the week at Exeter. I remember those evenings so vividly, though not the specific songs or readings. I just remember the fullness that I would feel in my chest, the tears that often spilled down my face, the swelling sense of being both entirely alone in this place and somehow part of something larger than myself.

Unfortunately the chapel at Exeter was not open the last time I was on campus. I expect in that space I’d have the feeling I described, of sensing the past in the present. I’d like to go back there and see if I can see, either with my eyes or my heart, the 16 year old me. I feel like she’s there, somehow, in some way. She’s sitting quietly, shoulders hunched, eyes glossy with tears and feelings. I’d like to go back to this chapel which was and is a sacred space for me, one that held some of the most whole and emotional moments of my time at Exeter.

11 thoughts on “The spaces that hold our memories”