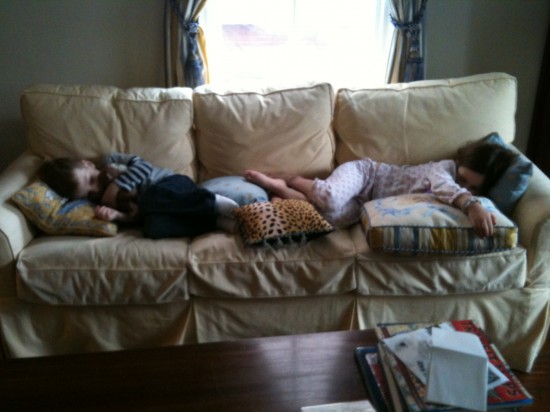 Saturday morning. For some reason, despite 12 solid hours of sleep, these guys were wiped out. They eased into their day on the living room couch. 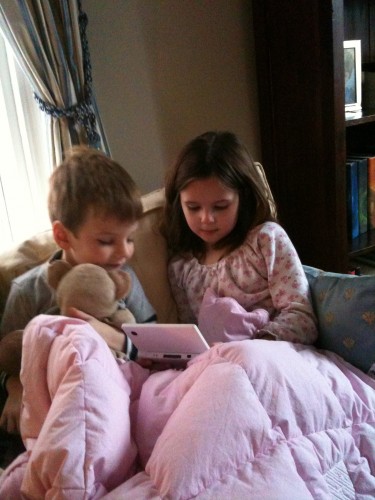 Finally they worked up enough energy to sit up. Whit watched Grace playing on her DSI. He was enraptured. She was sufficiently softened up by his avid worship that she even let him play a few games. Trust me, this is definitely not the norm. Methinks Whit is figuring out how to manipulate his sister just like he plays the rest of us. It’s only taken him this long with her because she’s just a little sharper than the rest of the family.

Later in the day, Grace and Whit were playing in her room and I did not know what they were doing. I heard Whit exclaim, “let’s do the shoulder opener, Grace!” and I had to see. I opened the door to see them in a partner yoga pose of surprising complexity. Scattered all over the floor was a deck of cards for kids with hand-drawn yoga poses on one side and an activity to save the earth on the other (Grace’s “big sister” gift on Whit’s birthday). I was blown away at how long they had been entertaining themselves doing this. Then Grace held up a card that showed one person in a handstand, leaning against the other person, standing in tadasana. “Let’s do this one, Whitty! You do the handstand,” she suggested, surprising me not at all with her selection of who would play which part in the pose. I decided this was a good point to stop and pointed out that hand stands were best attempted with parental supervision. 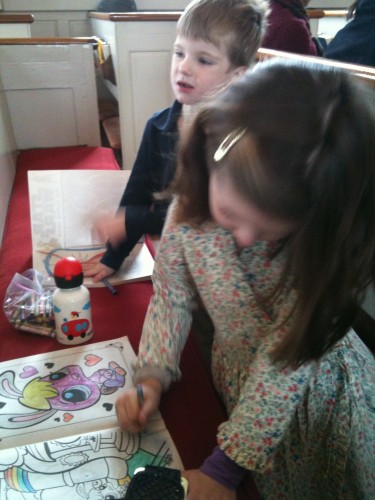 On Sunday morning, Grace and Whit accompanied me to church (after we took Matt to the airport). What’s more holy than taking pictures with my iPhone before the service starts? They colored and ate their booty (pirate for him, veggie for her) and then they actually sat and listened for a bit. Whit looked carefully through the hymnal and the book of common prayer and was disappointed by the lack of illustrations. They enthusiastically participated in the peace, shaking hands and repeating loudly, “Peace be with you!” to our neighbors. Later on as the rector said the prayers over the bread and the wine, Grace, who was reading the BCP with me, said “The Lord be with you,” in unison with the rest of the congregation. Whit said (not in a whisper), “No, Grace, peace be with you.” This child, hilarious as he is, is becoming a liability in my short-lived church career.

They both joined me for communion, and Grace for some reason reversed her firm stance on No (red) Wine to take a sip from the chalice. She spluttered dramatically as we walked back to our pew, eliciting several giggles from other people in the church. 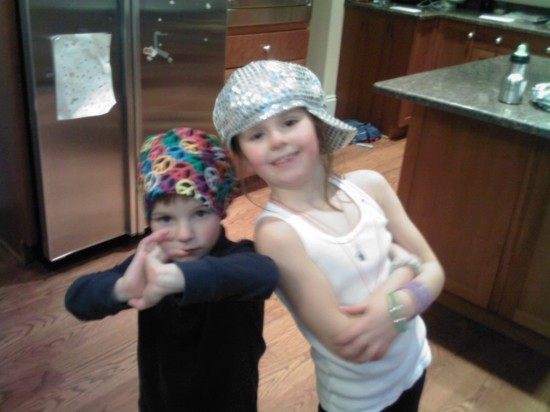 Grace went to a birthday party in the afternoon and Whit curled up with Star Wars and I curled up with bills to pay and thank you notes to write. Relaxation and fun all around! The party Grace went to was hip-hop themed, so she came home with this hat and a bunch of new moves which she promptly taught Whit.

They even went to sleep in good moods with each other. This has to be a record, and just as I think “my baby slept through the night!” is just asking for five nights of screaming child, I am likely jinxing it now. But it was lovely.

Watching Grace and Whit in a patch of sunshine, behaving benevolently towards each other made me think about my decision to have a second child. It’s no secret that my introduction to motherhood was difficult. The honest truth is I felt no impulse whatsoever to have another baby. Zero. In fact, truthfully, I felt dread and fear. But I also knew, intensely, that I wanted Grace to have a sibling. I feel guilty about this memory, because I worry it might make Whit doubt how fervently he is loved. Despite all of my anxiety, from the moment he arrived he brought laughter and joy in his wake, and he gave me the blissful newborn experience I so desperately wanted to have. And I haven’t for a single moment, ever, wished he was not here. I really do believe that a sibling is a gift. I have one, my older-and-wiser younger sister, and I can’t imagine my life – or myself! – without her. Seeing Grace and Whit this weekend made me think of the interwoven lifetimes that lie ahead for each them, the particular terroir they are growing in, and the tremendously good friend I hope they will always be to each other.

And I tried to pause over the weekend, to watch them, thinking: we won’t come back here.

13 thoughts on “A sibling weekend”