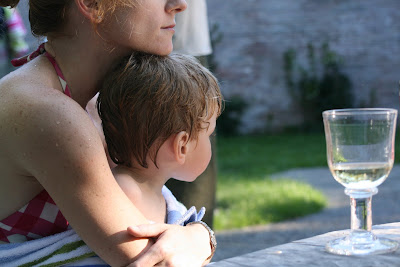 (random photo, but going with the wine theme, August 2007)

“In wine it is called terroir: the peculiarities of the soil, the water, the very angle of the sun, the land that makes a wine distinctly itself.” (Meg Giles)

Terroir: originally a French term in wine, coffee and tea used to denote the special characteristics that geography bestowed upon particular varieties. At its core is the assumption that the land from which the grapes are grown imparts a unique quality… (wikipedia)

The soil in which we grow, which contributes mightily to who we become. Been thinking about that today. It seems to me that the terroir of our childhood is the most critical, though I believe that people we meet and experiences we have in adulthood continue to have major impact on who we are and who we grow into as well. Of course as we grow older we have more control over who we let become our terroir, more ability to shape the components of the soil out of which we grow.

My childhood was a rich terroir, full of transatlantic airplane trips, whole summer days spent playing outside with our neighbors on Fairfield Street, the four families, piles of books so omnipresent that you tripped over them, Daddy DC, a very early Macintosh computer, walking alone from school down Brattle Street to the CCAE, the ship room in Mattapoisett, the shag carpet and mirrored bureau in New Hampshire.

There were knee socks, two braids, baguettes, and my father running behind me on a pebbled driveway in the French countryside watching me bike away, for the first time on two wheels. Nana’s cosmos in a heavy-bottomed vase on Fleetwing, Gaga’s Miss Piggy books, Ba’s boiling water before cutting the asparagus, and Pops’ basement workshop full of intoxicating smells of fresh cut wood and the allure of projects. Hilary was on the ground when the stroller broke in the Arc de Triomphe traffic, I was in the emergency room on Cape Cod with a broken arm in a leotard, Dad was smiling at 40 with his new windsurfer, Mum was masterfully cooking delicious things in the kitchen with no recipe and letting us and our friends paint on the walls of the back hallway (still, the coolest mother in the world).

The weather, both internal and external, also contributes to our terroir. The humidity of Mattapoisett summers, the snapping cold of the Waterville chairlift, London’s gray rain, the dry air and dusty velvet curtains in our first Paris apartment. The internal weather is harder to map, shifting as it does daily, but it has for sure been stormy.

Just thinking about this today, about the people, places, and experiences that shape who we are. I believe there are a handful of people who have had significant impact on me, who have contributed enormously to the particular flavor of the wine I am becoming. You know who you are.