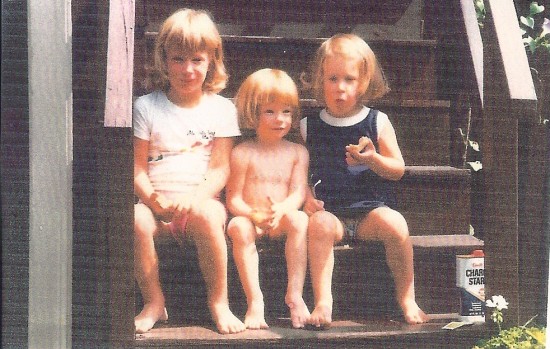 This picture is, I’m guessing, the summer of 1977 or 1978. It is two of my godsisters, Acey and Alexandra, and me. Don’t ask me why I am naked. Or why a bowl was used to cut my hair. Or why we are apparently playing with a can of kerosene. Ah, the 70s!

Two of my mother’s oldest and dearest friends are my godmothers. The three of them shared the unique and formative years of weddings and babies, and their friendship endures today. All three women had a daughter first, and all born within about 18 months of each other. My mother is godmother to each of them, their mothers are my godmothers. Etc. This is The Godfamily (I cannot say this without smiling, and thinking of Francis Ford Coppola films, Marlon Brando, heavy-handed music, and stretch Lincoln town cars).

Much of the godfamily gathered today to christen Acey’s sister’s daughter, Sally. Acey, Alexandra, and I all had our own children in the church: Alexandra had all three of hers, I had both of mine, and Acey had her older child, a daughter who is exactly a year older than Gracie (8). It is very rare for us all to be together – I actually can’t remember the last time it happened. Our visit was too brief, of course, and we managed to miss taking a picture of the three babies above all grown up. Oops.

Still, it was magic. There was a moment when I knelt at the altar rail for communion, with Grace on my right and Acey on my left. I looked over to the left and saw Acey and Alexandra, and saw all of our children clustered around us. I was overwhelmed with awareness of history and of the ways that families echo like Jacob’s Ladders through time, folding over on themselves, creating, with an awkward, slow rhythm, a long and connected line. I felt keenly the bonds that endure through the years even with too little time and energy paid to them. I saw in my mind’s eye the pictures of the three of us as toddlers, playing on the beach on Captiva with our beautiful, bikini-ed mothers, in the faded 1970s snapshots I have seen so many times.

I don’t talk to these women every day, but they will always be a fundamental part of me and of my terroir. They and their mothers played an essential role in my childhood and they are woven into the very infrastructure of who I am. I am so fortunate that they are still a part of my life, though I do feel sad that our children won’t grow up knowing each other well because we live so far apart.

And on to the comedy portion of this post.

I was actually very proud of Grace and Whit during church. With a couple of coloring books and a couple of ziploc baggies of Booty (veggie for G, pirate for W), they entertained themselves. They even watched some of the activity at the altar. Grace and Isabelle (her second-generation godsister) squeezed their way to the font for the actual baptism, watching closely. Whit chose instead to stay with me in the pew and murmur, over and over, “baby go dunk in the water!” He went to a christening with me when he was just beginning to speak, and on the way home he proclaimed that “baby go dunk in the water” This has become an oft-repeated sentence in our house, and he grinned slyly at me as he repeated it, reminding me that for all of his blithe casualness he is utterly aware of how he is being perceived, and of how much he loves to be a clown.

After the baptism and a rowdy Cantabridgian peace, we returned to the classic BCP communion service. The minister stood at the altar, holding the bread in one hand and the silver chalice in the other. He paused in saying the words that I know by heart, and the entire church stood still, silent. My son chose this moment to say, at full volume, “Gracie! Are you going to drink the red wine?”

There was audible laughter. I guess my children are incapable of communion without hilarity.

9 thoughts on “The godfamily. And red wine.”