I recently re-read Crossing to Safety (which Will Schwalbe’s beautiful The End of Your Life Book Club inspired me to do) and found it even more breathtakingly gorgeous and powerful this time.  Stegner’s novel joins Harry Potter in the rarefied ranks of books I’ve read three times.  It’s outrageously beautiful, human, and honest.  As I get older I appreciate both my own adult couple friends and Stegner’s rendering of the deep companionship, occasional conflict, and true love that can exist between couples more and more.

Between Splinters and Sparkles is one of my favorite posts by Amanda Magee, which is saying something, because I adore everything she writes.  This piece, about the beauty that is right there waiting for us, as soon as we let go of our attachment to how it was supposed to be, brought tears to my eyes and gladness to my heart.

These tights from Lululemon are keeping me warm, even at 5:30 am in the dark and below freezing.  They are cozy and I literally look forward to putting them on in the morning.

Great Kid Books – I love this beautiful blog that is chock full of thoughtful recommendations.

Every So Often the World is Bound to Shake – Powerful blog post by Jennifer Pastiloff about what happens when the earth splits and you fall in.  A reminder that all human beings experience the terrain under their feet quaking, and a testament to the ability of the human spirit to survive and, even, to thrive.

Little Things Add Up – I’d argue that some of Dominique Browning’s resolutions aren’t little things at all (deciding to be positive, getting more sleep, a whisper of thanks and an act of kindness every day) but I love her reminder that every small thing counts.  Getting off the elevator and walking an extra flight of stairs.  15 more seconds in a hug.  Let’s all remember that big changes are often the accumulation of many, many small choices every day.

What books, things, blogs, and ideas have your attention these days?

I am honored to have my essay, My Subject Chose Me, published at Literary Mama.  I love so much of what Literary Mama stands for, most of all the power that is contained in commingling motherhood and writing.  The work that I’ve read there is without exception both beautifully-written and thought-provoking, intelligent and honest, suffused with love of both the written word and the small, noisy people who populate our days.

Please click over to read my piece and spend some time on the site.  You won’t be disappointed.  I’d love to hear what you think. 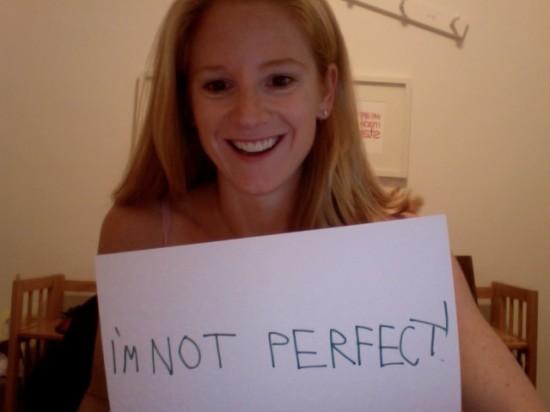 How’s this for imperfection … I could not figure out how to take a picture of myself and not have the writing be a mirror image of itself.  So I wrote it backwards. Dumb or resourceful?  You decide.  Either way, not at all perfect.  My post earlier today, about contradictions and complexity, could be read also as a celebration of imperfection.

I am thrilled to join in Brene Brown’s Perfect Protest.  I have long loved Brene’s blog (I wrote about one of my favorite of her posts here) and am reading her book right now.  I’m only about a third of the way through but already one of her sentences is haunting me:

we cannot give our children what we do not have

There’s no better reason to celebrate imperfection, to continue striving for authenticity, and to live as close as I possibly can to the core of who I am.  Thank you, Brene, for continuing to be such an inspiration.

I’m thrilled to feature one of my favorite posts by one of my favorite bloggers today.  Corinne from Trains, Tutus, and Teatime agreed to let me share her post, which for some reason (since that title doesn’t appear anywhere) I’ve called “Monsters” in my head.  This is a classic example of Corinne’s ability to “see into the life of things” (WW) which is only one of the reasons I love her.  She writes about her children, her relationship to the beach and to nature, her sobriety (seven months now!) … really, she writes about nothing less than the meaning of life.  Beautifully, eloquently, insightfully.  I’ve been fortunate to spend a bunch of time with Corinne in person and she’s even more lovely, gentle, soulful, and wise than you’d imagine from reading her gorgeous words.  I’m honored to call her my friend.
Please enjoy Monsters, and do click over to Trains, Tutus, and Teatime.  You won’t regret it!
Courage

Fynn tip toes through the hallway of his grandparents house. Textured white walls, cool for the Florida summers, snapshots of his and his sisters babyhoods hung in every room. Only starting to become familiar with the rooms and space, he ducks into a dark, windowless bathroom. He’s looking for shadows…. for Monsters. Armed with a blue flashlight as big as his arm, and a grin, he looks behind the door.

And off we go down the hall to my parents bedroom, facing shadows turned Monsters turned back to shadows with the glare of a beam of white light. My three and a half year old walking with a bobbing head and dance in his step, full of courage as he tames fears and darkness.

We’ve seen the episode of Curious George at least a hundred times. Monsters in the dark, George frightened and the Man with the Yellow Hat saving the night with a flip of a switch. Shadows from every day objects brought Monsters to life for George. The power goes out at the house in the country, lights unavailable, flashlights found and turned on, George is able to take care his Monsters by himself. Or maybe the scene happened in a cave, or was an entirely different episode. They all blend together in my mind, watched during the pre-dinner rush of dishes and pans waltzing from counter to stove to sink.

The dark hours are the times I struggle. The strength and courage I face the day with dwindles as fatigue sets in. Shadows of memories turn to Monsters. Finding a safe flashlight, one with a clear beam, is the biggest challenge of my recovery from alcoholism {or is it with? It’s never going to disappear… over three months into sobriety I still have trouble with the lingo}

The old source of light came in the form of a bottle, smelling sweet and acidic. It only smudged the Monsters, leaving them blurry enough so they blended into the walls and I could sleep. Not comfortably but I slept, though they were always there.

Now I don’t sleep. I’m learning, slowly, how to face them with a new light, a new source of power and clarity. Perhaps a lighthouse beacon instead of just any old flashlight… Facing them with this new illumination is difficult. It takes patience to steady my shaking hand, to quiet the mind and see and listen and turn them back into shadows inch by inch. But it takes time, and many nights staring at the walls and ceiling, in silent prayer and mediation. Hoping for a miracle within myself, or for The Man with the Yellow Hat to come walking in and calmly turn on the light.

We spend twenty minutes giggling and looking for Monsters. Searching cave after cave. Breathless, I ask him where he learned to be so brave, where he found his courage.

“George, Mommy. George goes into the cave with a flashlight and he’s not scared anymore.”

I’m arming myself with a flashlight, shining a beam of three and a half year old courage and bravery, hope and acceptance, onto the dark walls that house the Monsters. Created by years of numbing and shoving elsewhere, they’re on their way to becoming shadows again. It’s about time.

I’m thrilled to feature a post by Julie Roads of Writing Roads today. I have long admired Julie’s blog and we’ve recently corresponded, finding, to my delight, a zillion common threads in our lives and endless things to talk about. Julie is funny and straight forward, a writer and a runner, down-to-earth and tremendously warm. She is my age but as far as I can tell she looks much younger yet has much more wisdom.

I’m delighted to have met Julie, honored to host her words here, and excited to meet her in September.

This is one of my favorite of her posts (and that’s saying something, as I like them all, and love many, many of them). If you don’t know Julie, go check out her writing and thinking. You won’t be sorry.

We were a Tupperware family. Pastel and tinted. Yellow, green, blue, pink and white containers of all sizes filled our shelves and fridge. The big, square one stored the gum and candy packed for the long drive to northern Wisconsin every summer for family camp – and then held the one of a kind smell of Big Red, Coffee Nibs and Minocqua Maple Fudge inside it’s rubbery plastic walls all year, no matter what else we put in it. I would lift its lid at will to remember my summer.

There was another container that didn’t carry such happy memories. It was the Mother Bowl. It was HUGE, yellow and I could have comfortably sat in it until age 8. (Go ahead, Leslie, make the short joke…).

My brother apparently had something wrong with his heart (he’s totally fine now, as far as I know). My old and addled mind only remembers that he went to my grandpa’s cardiologist to get it checked out – and he had to run on a treadmill. They found that he had something called WPW, which apparently translated to ‘rapid heartbeat’. It would go like this: he would be playing basketball in our driveway with his friends, and then suddenly, he’d run in to the kitchen, grab the Mother Bowl, fill it with ice and water and plunge his face into it. And then he’d stand on his head.

When I was in high school, I started getting anxiety attacks. I thought I was dying and I was too scared for a while to ask anyone if I was – scared that the answer was yes. My way out of them, when they hit me, was to move. I had to bust my body out of the terrifying static that was paralyzing my limbs, eyes, ears, brain.

And it recently occurred to me that I, and maybe you?, were taught that when things really got going, when our hearts were racing and our minds were burning and our bodies were firing with energy – that the thing to do was jump off the track, get out, make it stop at all costs.

I can’t help but wonder what it would have been like to have someone grab my little scared hand, or better yet – for a magnificent voice deep inside me to grab my attention, and say, “Don’t go. Stay with it, ride it. Because this is the road to the next thing. This is the good part.”