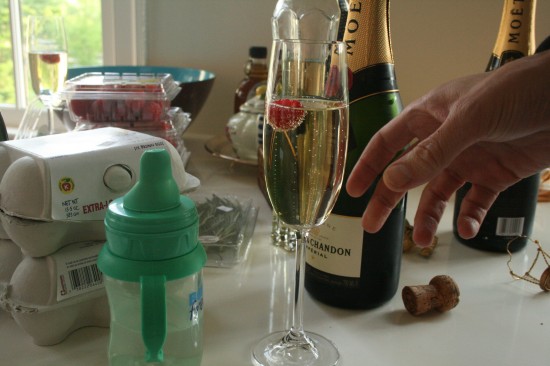 On Monday afternoon I interviewed about 8 people for positions in finance.  In between interviews, I hurriedly opened Katrina Kenison‘s Mitten Strings for God and devoured a few pages.

This summer I drove down to New York for an event that Aidan hosted with Dani Shapiro.  As I drove, I listened to Mary Oliver reading her poems (At Blackwater Pond – highly recommended) and intermittently switched over to listen to Top 40.  This mirrored my summer reading list, which was conspicuously short: I read almost everything in Mary Oliver’s oeuvre (many for the second time) and also didn’t miss an issue of US Weekly.

I have more photographs than I can count of images like that above, of wine glasses juxtaposed with sippy cups or bottles.

I often toggle back and forth between an Excel spreadsheet and a Word document.

More than once I’ve run home from a yoga class, showered and pulled my wet hair into a ponytail before sliding into heels and a suit and rushing to a meeting in a downtown high-rise.

These are just the kinds of incongruities that exist in every single day of my life.  And these reflect, I am realizing, the contradictions that live in every cell of my body.  Even more than that – these contradictions animate who I am.

I’ve spent so much energy on angst about these things: how is it that I can devotedly shop at only farmers’ markets in the summer months but also down lots of Diet Coke a day?  What does it mean that I give time and money to one of the causes that means the most to me, homelessness, but also own more than a couple of pairs of Jimmy Choos and Manolo Blahniks?  How did I, an at-least-borderline-introvert, end up in a career where I spend most of my day interacting with people?  Why is it that someone as incredibly sensitive as me, who assumes every single thing is a personal comment on my own inadequacies, is often told she comes across as aloof, even a b%t#h?

Of course there are lines we ought not cross.  There are ways in which one part of our lives can violate important tenets of others, or choices we can make that conflict with our essential values.  I’m not endorsing this.  But beyond these, I’m increasingly convinced that some contradiction is part of almost every person.  The challenge as I see it is to walk the fine line between acknowledging our inherent variety (and the occasional tension it produces) and recognizing when the friction between the various pieces represents that something is awry.

I remember a friend of my parents’ saying once, years ago, that she was suspicious of people who were, as she put it, “smooth like an egg.”  There’s something to this, I think.  Any time I have really gotten to know someone I’ve witnessed incongruities and things I did not expect.  None of us is as simple as most of the world would like to imagine: that is what makes people so fascinating, so tender and so terrible, so human.

My magazine list represents my multi-faceted interests; you could ascribe this list of titles to someone who has no idea what she wants, or you could simply say they reflect a kaleidoscope of a person.  Even in my “about me” page on this blog I instinctively described myself in terms of some of my seemingly opposed traits: “I am strong (I delivered both of my children without any pain medication) and I am weak (I get really sick at least 3 or 4 times a year). I cry every day, possibly more than I laugh (and I want to change this ratio).  I grew up moving around every five years, which has left me with a contradictory combination of restlessness and a deep craving for stability. I’ve been to most of the countries in Europe and only about ten states.”

As long as we do not make choices that oppose essential values, I think this kind of complexity is both entertaining and captivating.  The fact that we do not, any of us, fit into the narrow categories that the world would seek to cram us into is the source of our very humanity. As long as all of these facets are authentically felt, they are not inconsistent; they are real.

Sure, there is friction, because the world is more difficult to order and understand when people are always overflowing out of their compartments and subverting the black-and-white definitions others would like to impose on them.  But it makes the terrain of the world so endlessly transfixing and the stuff of art.  And I don’t want to live in a world where every single week doesn’t contain both wine and sippy cups, poetry and Hollywood magazines, and sneakers and high heels.

Very well then, I contradict myself.