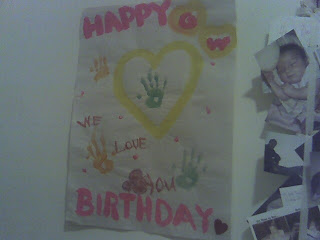 What a treat to come home to this happy birthday poster last night – made by Grace and Whit with help from Anastasia (bonus photograph of my dear goddaughter Emma on the right). Had a great celebration last night with Whitney, Annie, Brooke, and Suzanne, and this morning had breakfast with my mother and my daughter – what’s more special than that?

Email from Daddy, which made me cry:

It was 33 years ago that you arrived, and I left the hospital in the early morning to lecture about land use models at an executive education program at MIT. A fond memory.

And what a furrow you have carved!

I remember several years ago, when I was deep in my yoga phase, a comment by Lacy: she noted that I had always been a runner and that my commitment to yoga signaled some kind of new comfort with being still. I think there is some truth to that, but when I really think back, I think it’s more that those 4 or 5 years of yoga were an interval in a lifetime of running.

All of which is to say, I spent this morning’s run by the river thinking back over years and years of runs. I also thought of GodMomGloria, whose birthday was yesterday (and remembered 2 years ago, at Whit’s christening, when I opened the door to see her and realized I had forgotten her birthday – we put candles in the brie at the party, but still, I feel terrible!), and who’s celebrating 33 by herself in Prague running a half marathon. Fantastic. I’ve set my Tivo to record Jim who is anchoring WNT tonight, as well.

I started running almost 25 years ago, keeping my Dad company on his Fresh Pond circuits … I have very vivid and happy memories of those early runs, and also recall him panting to me, “Linds, NO MORE questions until we’re done!” as I ran along beside him, yapping like an annoying lap dog. I also started running 10Ks before I was 10, often with Tory McEvoy, who has reentered my life lately in a serendipitous way.

The first time I ran in earnest was at Exeter. I ran cross-country, for one thing, but it was really that long, dark winter of my incredibly sad senior year when I ran, and ran, and ran. All I remember of those short days and long nights are miles and miles of running and Mr. Valhouli. Literally. When it was truly too cold to run in the woods I would go to the cage by the gym and circle the 1/4 mile track over, and over, and over. This morning when the Grateful Dead came on my ipod I was thrust back to those circuits of the cage (weird running music, for sure, but I maintain that Sugar Magnolia is a great love song).

At Princeton I kept running, mostly junior and senior year. I remember getting up at 7am, feeling like the only person awake on campus, and running on the tow path and through the institute for advanced study. I could run 6 miles, have breakfast at Ivy, and still be at a 9am class. This was perhaps when I realized how fully I am a morning person.

In the early BCG years I really discovered the Charles and its various bridges, all of which meted out different mileage opportunities and different vistas. During HBS this was still where I ran, though now from Cambridge and headed into Boston, vs. the other direction. Pam Houston may celebrate the clarity and mind-clearing properties of sunshine on fresh snow (see tabblo about this here) but I think my version is the early morning fog rising off of the Charles, an occasional single or double shell slicing through the water, the sun coming up through the Boston buildings.

Marion, too, has its share of my footprints – the morning of our wedding I remember running out to Converse Point and watching the sun come up over the dark hump of the vineyard, distant on the horizon.

Random musings for a Saturday morning. My hip hurt a bit this morning (odd, have never had pain there) but it eased as I warmed up. Am really thinking about doing the Covered Bridges 1/2 marathon in May. Need to look into that. 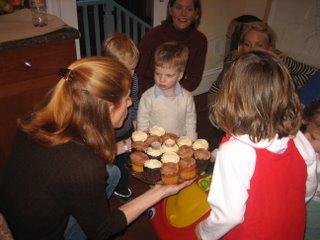 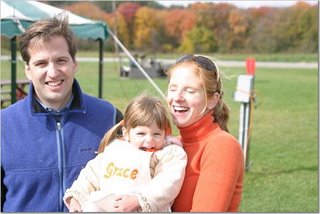 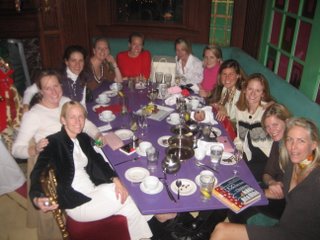 What’s better than champagne, dear friends, and presents, at 3pm on a weekday? Not a whole lot. Divine afternoon at Upstairs, lots of laughter and great holiday cheer.

AND I got to spend the pre-3pm hours with Abby … heaven on earth. Not many friends in this world who can appreciate the sheer joy of just hanging out in a bookstore. I found a terrific poem in a Garrison Keillor-edited anthology, which I bought, and I’ll surely have some passages to post.