Whit has been Comedy Central this week.

On Thursday I came home from New York to find him playing in the snow in a huge fluffy hat and a chest full of necklaces (displayed over his parka). Anastasia told me that she had gone into his room during quiet time to see that he had emptied his closet onto the floor. He had painstakingly created piles of clothes by type. Like Benetton, with matchbox cars, is how I envision it. She asked him what he was doing and he said, “It’s a store!”

In his travels through his closet, Whit apparently found two pairs of old shortie pajamas. He decided that the shorts of those pajamas were his “exercise pants.” He told me which pair were for daytime and which for nighttime. On Thursday night, he insisted on going to sleep in the nighttime pair. On Friday morning he came out of his room like a shot, yelling, “Where are my daytime exercise pants??”

Friday afternoon Whit and Grace were playing in his room when he came out, having changed his own clothes. He was wearing his exercise pants, a tee shirt, and his terry sweatband. He looked like a cross between a member of the 1974 Olympic team and Richard Simmons. 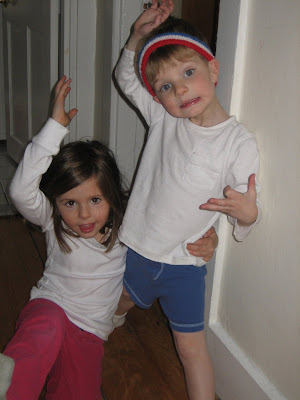 On Friday evening I was packing him into the car to go to New Hampshire. There was a random tennis ball can in the front hall with an assortment of toys and trash in it – tinkertoys, legos, some random pieces of paper with “art” on them. As he was being carried out to the car, Whit hollered that he wanted to bring the can of “treasures” with him to New Hampshire. No, I said, in no uncertain terms.

“But mummy! I need my exercise pants!” he screamed over Matt’s shoulder from the sidewalk. He ran back inside, dug through the tennis ball can, and unearthed two pairs of shortie pajama bottoms. He clutched them, sighing happily, “my exercise pants.” He went to New Hampshire clutching them in his hands.