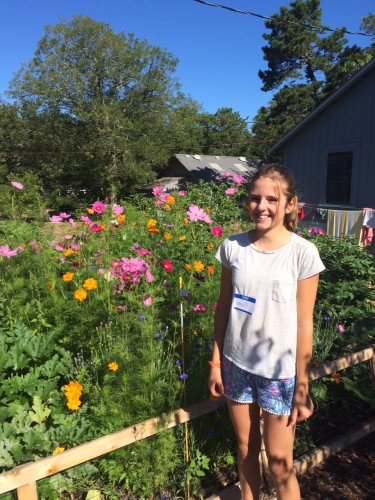 A short-lived smile, by the flower garden next to her cabin.  Cosmos always remind me powerfully of my maternal grandmother, Nana, and given the proximity of them to Grace’s cabin, I like to think she’s watching over her great-granddaughter at camp. 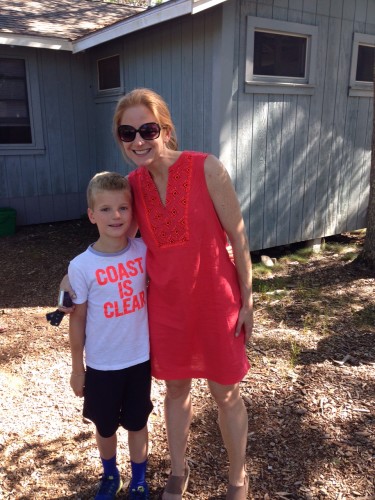 Right before the final goodbye.  Right before I took this, he looked at me and said “after this you are leaving, really?” nervously.  I nodded, and we took the photograph.  I don’t know if you can see his apprehension in his eyes.

Last Thursday we dropped Grace and Whit at camp for 3.5 weeks.  This is her 5th summer and his 3rd.  I know, I know, I’m a broken record, but seriously?  It feels like we just took her for her first summer a week ago, so how is this possible?  As usual, I drove away in tears, and as usual, my heart was heavy for days after leaving them at camp.  Not because I doubt they’ll have fun, not because I worry about their safety or joy while away from me.  Not at all because of other of those.  Not even specifically because I’ll miss them, though I will.

But, mostly, the sorrow is due to the realization that I am already here, already at this point teetering on the edge of something very new and very scary, already at the day that many more years with children at home flutter behind me, like prayer flags in the wind, than do ahead of me.

Grace was weepy at drop off.  Truthfully, it was the hardest camp goodbye yet.  Well, maybe not harder than the first time, when she was 8.  But I was a bit taken aback by how sad she was, and by how hard it was to walk away.  Part of that was because we were early and many of her friends hadn’t arrived yet.  Part of it was just because she seemed to be in a cabin without counselors she knew.  And part of it is probably just because of this particular moment in life, which is marked by closeness and intimacy which both makes me anxious (should I worry?) and glad (I am grateful for our bond).

Within 24 hours I had decided, though, that it’s all fine.  Maybe it is better this way.  Perhaps the benefit of camp is not in spite of her finding it challenging this year but because of it.  That was quite a flip of attitude for me and it felt like something heavy had been lifted.  Yes.  Precisely this: the discomfort may be what makes it so valuable.  The uneasiness and tears speak to the growth.

On Tuesday night before we left, I tucked Whit in. He was quiet and visibly wistful. I flicked the light off and climbed into his narrow bed next to him and whispered, “It’s almost time for camp. How do you feel about that?  Excited?  Sad?”  He swallowed and, staring up at the slats of the bunk above him, said quietly, “Both.” I looked at his profile in the faint glow of the Bruins zamboni night light Grace gave him for Christmas, and it occurred to me that’s how I feel about camp too.  And, actually, it’s how I feel about every new vista of this parenting journey.  It’s how I feel about life itself: excited and sad at the same time.

Excited and sad at the same time.  Always.  The goodbyes and the hellos keep coming fast and furious, inextricably wound together.

21 thoughts on “Excited and sad at the same time.”