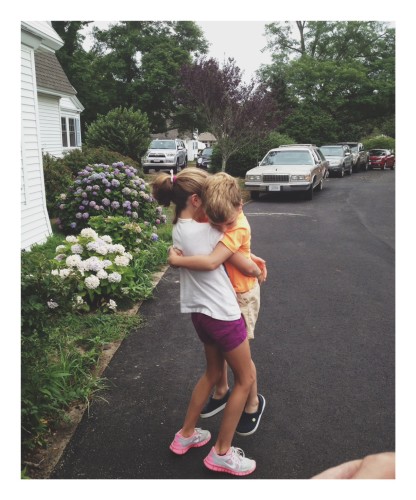 It was an emotional ride to go from the 24/7 togetherness of Legoland to dropping Grace and Whit off at camp last Thursday.  You could view it as I spun it to them: so many memories to sift through while we’re apart!  So much water in the well of closeness!  But you could also say to yourself: wow that was a tough transition.  And the truth is I’m still reeling from it.

On Wednesday night I could sense that both kids were apprehensive; they were unusually quiet.  Even though this is Grace’s third year at camp, it’s the first time she’s gone for 3.5 weeks.  And it is Whit’s first time.  I read them both Harry Potter, one at a time (Grace is on #7 and Whit is on #4 and I am still not bored of Harry’s world, even after a third complete read).

I tucked Whit in first.  He asked me to lie down with him, and so I did.  He stared up at the bottom of the bunk above him and asked me, out of the blue, “If I went through a black hole and was still alive on the other side, would I end up in another universe?”  After a soft chuckle I told him I didn’t know, but I’d prefer he not try that, at least not yet.  I turned my head, next to his on the robot-print pillow, and looked at him.  He kept staring up at the slats above him, which I noticed recently are covered with stickers.

We lay in silence, and I looked at the curves of his face, as familiar to me as my own hand.  His profile hasn’t changed from when I first saw it on a cloudy ultrasound screen, and it feels like only a few heartbeats ago that I lay in that darkened room, a technician swirling a wand over my just-beginning-to-bulge belly.  After a couple of long minutes, during which I swam through the swirling waters between then and now, which are both infinite and instantaneous, and which are full of phosphorescence, I leaned over and kissed his cheek.  “Good night,” I murmured.  “I love you.”

“I love you too.”  He didn’t turn to look at me, and I could see his that his eyes were glistening.

I sat up and looked at him.  “I love you as much as that universe, Whit, or that black hole.”

“I love you as much as all the universes, Mummy.”  I left the room before I began to cry.

I pulled it together before walking downstairs to Grace’s room.  I stood in the door and watched her reading in bed.  The small clip-on lamp on her headboard cast a pool of light around her, and I could see the shadows of her eyelashes on her cheeks.  Her legs looked impossibly long.  It was a full two years ago she stopped me in my tracks, this same night, before camp, when she told me sternly that my life was full of magic.  I have never forgotten that, because it is.

The next day we got up early to drive to camp.  Matt told me later that as the children were eating breakfast, he overheard Whit tell Grace quietly that he was “feeling kind of anxious.”  She apparently reassured him.  When we arrived at camp I was flooded all over again with memories and with an intense gratitude that Grace and Whit now share this place that meant (and still means) so incredibly much to me.  Grace’s best friend, the daughter of my best friend from camp, arrived, and the whole planet seemed to click into place.  All was well.

I helped Grace settle into her top bunk in the cabin that I lived in in the summer of 1991, met her counselors, and watched her happy reunions with a few familiar faces.  She did not cry, but she kept asking me to stay.  I finally told her firmly that I had to go and left her with a long hug and our secret sign that means “I love you.”

In Whit’s cabin I encountered a wall of broad-shouldered blond young male counselors whose names I promptly forgot, settled Beloved on his pillow, and heeded his vociferous insistence that he did not want to unpack his underpants.  He said he was ready for us to go and my saying “I love you” out loud made him flush.  He looked at me sternly, making it clear that was not okay.  But then, as we left, his eyes eyes followed us to the door and, before we were out of sight, he gave me our private sign for “I love you.”

And then we drove away.  I cried on and off for the whole ride home.  I am not sad because I have any single inkling of doubt about how wonderful this experience will be for Grace and Whit.  I don’t.  I am sad because I miss them; being alone for 10 days makes abundantly clear how much time I spend with my children in a normal day, and reminds me of how much I love their company.  It’s not that I forget that, exactly, but I am definitely more aware of it when they’re gone.

But most of all I cried because 10 years of my life with small children at home is already gone.  I was, and am, sad for all that’s over, for the years that have fled, for all that I can never have again.

There’s no question that I love right now more than I have any other moment in my life.

But that doesn’t erase the anguish I feel over all that is over.  I wish it did.

As we crossed the Sagamore Bridge it began to rain lightly.  The familiar, beautiful, astonishing world was blurred and refracted through the raindrops on the windshield.  I thought of Grace and Whit, of the sandy wooden floors of their cabins, of the low voices of the JCs singing Taps at the end of an evening assembly, swaying, arms linked around each others’ shoulders, of the dunes that slope down to the beautiful sailboat-spotted bay.  I thought of all that changes and all that stays the same, and gratitude swelled alongside sorrow in my chest.  It kept raining, and we drove home.