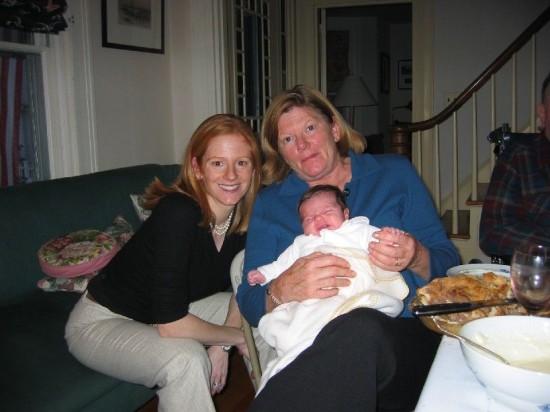 My fascination with and investment in the mother-daughter relationship is well documented.  Just last week I wrote about it for Brain, Child.  This is a long-standing interest of mine.  If I’m honest, the ferocity with which I wished for a daughter when I was pregnant sometimes scared me.  It also shocks a lot of people that we chose not to find out the gender of our baby (either time).  And then Grace arrived – somehow brutally slowly (40 hours of back labor) and instantaneously – and suddenly I had a daughter, my frantic wishes were answered, and I became the fulcrum, a daughter to a mother and also a mother to a daughter.

One of my most vivid memories of those first blurry and difficult weeks of motherhood was of an afternoon when Mum came over to sit with Grace so that I could nap.  I lay in my darkened bedroom, knowing that my infant daughter slept above me and my mother cooked in the kitchen below me.  Matrilineage flanked me in a concrete, visceral way and I remember feeling warmed by it, firmly aware of my place in the line of women that I came from and had, now, birthed and contributed to.

While I don’t write about her that often, my mother is truly extraordinary and I am fortunate to live only a mile away from her now.  Last fall I said that “one of my mother’s many gifts is her immediate and expansive warmth, the genuine way she welcomes everyone into her life.  She has always attracted people to her, and, like a sun, is surrounded by more orbiting planets than I can count.”  I aspire to be the kind of relaxed, loving, outgoing, the-more-the-merrier kind of mother that Mum was and continues to be.  Watching her with my own children, as I did over Easter, is one of the principal joys of my life.

Mum embodies the quote that she and I both chose (clearly, I was copying!) for our high school senior yearbooks: To miss the joy is to miss all.

Motherhood and daughterhood, while always on my mind, has been particularly so of late.  I’ve been thinking of lessons that my mother taught me …

1. Some of the best stuff in life occurs in the outtakes.  Keep your eyes open to the stuff around the edges.

2. Don’t worry about the small stuff.  Really.  It takes care of itself.  Keep an unerring focus on the big stuff.

3. It is not an issue to cook dinner for 14 people with an hour of notice. Or to routinely serve Thanksgiving to more than 30 people.  In fact it’s not really Thanksgiving without a random international student or someone your daughters have never met at the table.

5. Female friends are essential and are in many ways the single most important bulwark against life’s storms.  Invest heavily in those you know you love dearly.  Old friends are precious, and cherish them.  Family friends are a genuine gift.

6. Showers are always better outside.  Even in November.  In New England.

8.  When your new son-in-law brings you a whole pheasant that he shot to cook, just smile and make pot pie.  Serve it for Christmas Eve dinner.  It’s not a big deal.  To go further, there is nothing culinary that is a big deal.  At all.

9. Attitude is everything.  When Mum was injured several summers ago she demonstrated this in spades, and I can’t count the number of people – literally, tens upon tens – who reached out to tell me that her positive spirit and energy were tangible and would carry her through.  They did, and I admire(d) it.

10. There is a mysterious alchemy in the wind and the water that cannot be fully explained.  I watch her at the helm and understand what that there is something truly intuitive and beyond logical thought about sailing.

11. You can and should play tennis until you are 90 years old.  And possibly beyond that.

12.  Don’t waste your time and energy on negativity.  Of any kind.  Focus on the good in people, in the community, in the world, and eventually that positivity will become your default.  “It takes an awful lot of energy to hate,” Mum used to say to the occasionally irate, incensed child me.  She was always right.

14. Look forward, not back.  There are adventures to be had, gardens to plant, Scrabble games to play, trips to be taken, people to meet.  So much lies ahead, and turn your energy that way.

15. People flock to those who radiate energy and warmth like my mother does.  At an event recently a man I’d just met took me aside and whispered, “Your mother is a force of nature.”  I know, sir, I nodded.  I know.

Parts of this post were originally written in 2012.  And I was hugely inspired by Galit Breen’s beautiful piece about lessons learned from her own mother,

17 thoughts on “Mothers and daughters”