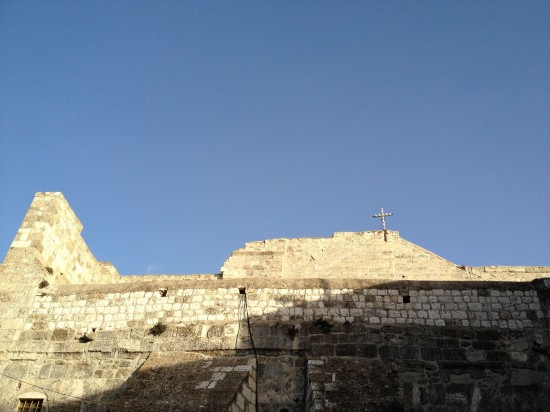 I have been thinking, for days now, of how to describe our magical adventure, our family trip to Jerusalem, a week full of delights and overwhelm and memories none of the four of us will ever forget.  We experienced things, individually and collectively, that moved us all deeply.

This is the photograph I keep returning to.  Not any of the more glorious ones, of famous sites, of gold domes and flags waving in the cornflower blue sky and 12th century churches, of childrens’ smiles.  It took me a while, but gradually I realized that this photograph asserted itself for a reason: it fits perfectly with my reflections on 2011 and hopes for 2012.

For me, Jerusalem was about faith.  It is a place where the extraordinary power of religion – to render both egregious harm and outrageous beauty – is undeniable, unavoidable, written indelibly on every cobblestone, every mosaic tile, every crying face.  We saw the silver star on the floor marking where Jesus was born and the rock where he was crucified.  We saw people weeping at the Western Wall and the stunning gold dome where Mohammed ascended for the first time.  I stood outside the Church of the Holy Sepulchre, listening simultaneously to a ghostly choir singing from somewhere inside (above us?) and to the haunting Muslim call to prayer, the two sounds floating on the same incense-scented air, colliding and, improbably, weaving together into nothing less than the sound of faith.

Faith is something I’ve written about a lot.  It’s something I think about in the middle of the dark night, something I lunge for, awkwardly, clapping my hands together, trying to grasp it even as it floats away, something I look for above me, in the clouds, in the patterns of bare branches against winter’s sky.  It is impossible not to be moved by the tangible faith all over Jerusalem, in the relics but most of all in the way faith itself is animate in the hundreds of thousands of pilgrims moving through the streets.

Above all, there was one moment.  On Christmas Eve, we made our way to Bethlehem (for the second day in a row: on the 23rd we’d gone, seen Jesus’ birthplace, walked around the Church of the Nativity).  We walked across the intense checkpoint between Israel and the West Bank, and after a slow taxi ride made the final half mile ascent into Manger Square on foot.  The sun was setting, and the streets were packed with a crowd whose mood seemed to skitter between ebullient and emotional.  I had a child holding each  of my hands.  And then I looked up.  And I saw the end-of-day light on the wall of the Church of the Nativity.  And my heart thudded and my eyes filled with tears.

That was my moment of faith in Jerusalem.  Not the big scenes, the places where pilgrims threw themselves to the floor and wept, the places where I imagined I might feel the presence of a sense sublime … of something far more deeply interfused.  No.  Instead, it was the setting sun on a wall that had been there for many, many years.  A wall that has mutely witnessed tragedies and glories, that has been watered by the tears of the faithful and been subtly shaped by the over-centuries erosion of their handprints.  It was the light.

Last year I chose a word of the year for the first time.  Trust served me well.  The truth is, I’m not sure – for me at least – there’s a whole lot of difference between trust and faith.  At least there isn’t in how I think of them.  I spent a lot of time thinking about trust last year, and while I still struggle with the effort to let go and to believe that everything is unfolding exactly as it should, I feel enriched and calmed by having focused on the word for 12 months.  I wasn’t going to pick a word for 2012, though.  Nothing really came to me.  But then in Jerusalem I kept thinking of this same word, and this picture, out of so, so many, kept pushing itself into my consciousness.  So here it is.  For 2012.

Light as in less-heavy: I want to laugh more, to remind people – maybe even all of you, and certainly myself – that there are many aspects of my personality that are not stiflingly serious.

Light as in light on trees, on stone walls, on the faces of my children.  Light from inside and light from outside.  The light of sunrise and sunset, whose source I cannot fully understand; this is the light that makes me feel trust, makes me feel faith.  I am already fairly attuned to this light, photographing it all the time and writing about it even more incessantly.

May the light from the Church of the Nativity, which tremendously moved me, stay with me in 2012.  May I never forget that the power in light resides, somehow, in its relationship to darkness.  Shadows exist at the edge where light meets dark, and they are where I have always found the most meaning.  There is no reason to be afraid of the dark.