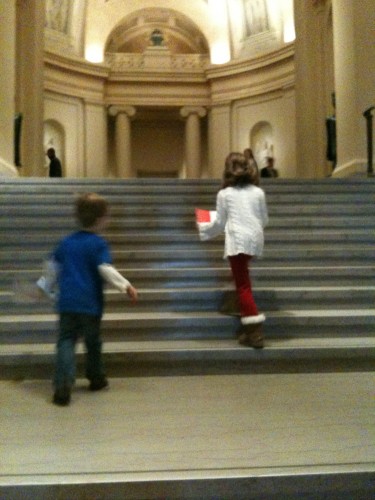 Today dawned bright and cold. Matt is in Asia, so it is just Grace, Whit, and me this weekend. Grace woke me up and then returned to her room to read (okay, fine, play with her new dsi) so I could wake up slowly. Whit slept until 8:30 (possibly a record). Already: delightful. After waffles and bacon for breakfast the children watched cartoons while I began wildly throwing things away. I’m almost finished with The Happiness Project and so far the idea that has the most traction with me is the empty shelf. I woke up desperate for my empty shelf.

After an hour of work, six Goodwill bags, and three trash bags, I have two empty shelves! Hooray.

Late morning, the three of us headed to Grace’s gymnastics lesson. Whit watched his favorite cartoon, Avatar, on my old iphone while I watched Grace (she looked over to make sure I was watching her with a frequency I found both touching and disconcerting). It’s amazing to me that after only three classes she can already do a competent cartwheel. Amazing, mostly, I think, because it reminds me of how old and competent my child is. When did this happen? As I’ve said before, I often find myself wondering when the real mother is coming home.

A huge treat: Burger King chicken nuggets for lunch. Wow does that make these children of mine happy! They are still playing with the plastic toys they received with their meals.

After a short rest we went to the Museum of Fine Arts to meet one of my dearest friends and her two boys. We sang along to Kiss 108 songs on the way there (top 40) and Grace awed me with her every-single-word knowledge of every single song. When does she learn this stuff? I don’t spend enough time with her in the car for it to be from that. She clapped and exclaimed when the Kings of Leon song “Use Somebody” came on and my first thought was: my daughter is cooler than I will ever be. I watched her in the rearview mirror, gazing out of her window and mouthing the words, and I swear I could see her 15 year old self in her 7 year old face. My heart tugged.

Then the true genius of Fake Mommy me made itself apparent. I parked in a parking lot right across from the MFA entrance I have always used, and urged the children to leave their coats in the car so “we” (read: I) didn’t have to carry them around inside. But then I took us out the stairway right by the car and exited onto a totally foreign street. “Let’s go back inside!” cried Whit, already shivering in his tee shirt in the 31 degree day. I tried the handle. Locked. Awesome.

We finally figured out, after a couple of tries, where we were. We had to walk around a long block to get to the museum. I swear I was winning Mothering Gold Stars from every car that passed, as I wandered aimlessly with two coat-less children on a frigid day (so cold that the friend I was going to meet had deemed it too cold to go skiing – where they would have presumably worn coats). Relieved, I steered the kids to the entrance by the parking lot (now that we had reached it through 10 minutes of walking). Oops. I guess that entrance is now closed.

Another long city block later, we finally stumbled into the museum lobby. Both kids were absolutely breathless with laughter about what a silly mother they had. I laughed with them, grateful that such small things bring such joy, amazed by their pink cheeks and good cheer. We explored the museum for a solid hour and a half, which is about the limit of both a four year old’s attention span and, incidentally (and not impressively), my own.

The highlight of the museum visit for the children was no doubt the sweet snack they enjoyed in the basement cafeteria. We braced ourselves for the cold and jogged back to the parking lot, one child holding each of my hands. They giggled so hard we had to keep stopping. Who knew that a coat-less run on a winter day had the potential for such hilarity? I’m glad I found out.

Driving home, Whit noticed that the Charles River was frozen solid. He stared out his window at it in and his visible amazement made me smile. Then Joni Mitchell’s Circle Game came on, which both kids know because it’s on the (short) list of songs I play (all the time). I listened as they both sang along, quietly, and felt a huge swell of gratitude and sadness. A quote rose to my mind, popsicle-stick-like:  Everyday life is laced with miracles.  My eyes filled with tears and I thought: this is it. This is what I keep writing about. I am here now.

16 thoughts on “An ordinary Saturday”