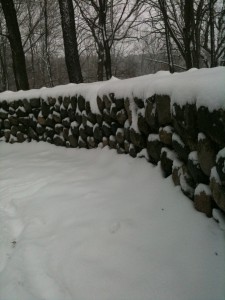 I don’t like New Year’s. I never have. It’s not for the same reasons that most people complain about – the pressure to have a good time, the overwrought celebrations, etc. For me it’s the same reason that I dislike birthdays: this day marks the passage of time in an unavoidable way. I generally go to bed before midnight and try not to think about moving from one year to another. The anxious feeling of being balanced on a fulcrum haunts the days before New Year’s for me, and in the same way that I feel a hundred pounds lighter the day after my birthday, dissipates immediately after it.

Despite this anxiety, I love the time between Christmas and New Year’s. The week hangs like a slack hammock between the two holidays. The days feel removed from reality, and in the last few years they have been brilliantly lovely for that. A respite from regular life, some time to breathe, think, sleep, wonder. I haven’t come to any meaningful conclusions, or made any decisions, but the week held some joy, some space, and that is a gift.

I don’t make resolutions. Maybe this is all part of my dislike of what feels like an obnoxiously loud transition to another year, a maudlin and inescapable reminder of another year gone. Maybe it is a lack of commitment to self-betterment. I don’t know. Whatever the reason, I don’t have resolutions to share.

I told a friend a story recently that comes to mind often when I think of the way things bubble up in my mind. When my sister and I were little, we often visited my dad’s parents on Long Island. They lived near the beach, which had a long pier that extended into the water. At the end of the pier floated a wooden dock. Hilary and I, along with other kids, used to play a game with our popsicle sticks. After we had sucked all of the sweet ice off of the sticks, leaving only the stained wood to remember what flavor we had had, we headed to the dock. One of us, wooden stick clasped in his or her hand, would dive as deep as we could. The other children would stand lined up along the edge of the dock. The first person to notice the stick rising from the deep water would dive in and grab it, and thus win the round.

This is how I often think of thoughts and truths coming to my mind: slowly, bobbing irregularly, swayed by invisible currents. Sometimes I think I see the paleness of the stick deep in the murky darkness, and it’s not really there; other times I am surprised by its sudden, obvious appearance and can’t believe I didn’t see it on its way up. Either way, there are things percolating in the ocean of my head. Not resolutions, not answers, but truths. Unavoidable feelings. Perhaps it is my spirit, turning over in its sleep, waking slightly only to fall back into slumber. Whatever it is, there is something under my breastbone, something in my head, making itself known.

I look forward to welcoming these truths in 2010. To making the space to feel and know them. To learning of how to trust them. For now, I sit and watch the snow outside the window, falling softly, like grace. Rendering the world new. White, and quiet, and peaceful. And, for now, it is enough.

8 thoughts on “Snow falling, sticks rising, in a new year”