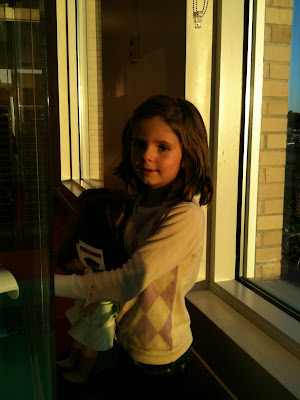 Yesterday afternoon Grace and I went to the American Girl store (aka, mecca) to accomplish several things. Yes, Mum-Grace time. Yes, dinner with a couple of special friends to celebrate (yet again, another celebration, the price Grace extracted for sharing her birthday party – good manipulator, this little brunette in Gap 6 slim jeans is). But most of all, way most importantly: spending the gift card a friend gave her. Oh, yes. We had spent the days leading up to the outing leafing through the American Girl catalog, poring over items and prices and doing lots of math. And by “we,” I mean Grace, with occasional math-checking or opinion-sharing by me.

Originally she wanted to spend her whole gift card plus all of her tooth fairy money on one big thing. Then she decided to buy two smaller things instead, and save all of her tooth fairy money. This was accomplished with a lot of agonizing and earnest staring into my eyes, begging for guidance. She was so sweet, and so serious, and it seemed as though this was the very last time she’d ever get to buy anything, ever.

As we drove home, with the two boxed American Girl purchases in the car, we talked about money. About the meaning of it, about having it, about not being able to have everything we want. She was impressively realistic about how she coudn’t buy everything she wanted, but she also evinced some very age-appropriate frustration about this fact. This was a heart-rending conversation for me, so serious and real. I thought of the quotation that Catarina sent last year that still says best of all the way I think about this:

I want my children to thrive without being acquisitive, to have enough prosperity that they can be generous, to feel self-sufficient enough that they may never be bought. Let them be sensible enough to care for themselves – and one day, perhaps, for children of their own.

My strong instinct is to be fearful of not having enough, to save to a sometimes irrational degree. I am wired that way, myself, and recognize both the pros and cons of this orientation. I’d like to impart this general frugality to Grace, while also giving her, as the quote says, a sense of prosperity. A feeling of having enough, that is another extension of the all-important feeling of being enough.

While I want Grace (and Whit) to have a healthy respect for the importance of saving and being careful with money, I don’t want them to have the feeling of always being right on the edge of not having enough. I think this creates unnecessary fear, contributes to a sense of instability and unsafeness that I want very much to protect them from.

But then, I wonder, am I over-protecting them? Come with me, all of you, into the maze of my thoughts, where one concern turns over to reveal another, and then back again, and wheeeee before you know it you’re in the center of the labyrinth with the minotaur.

Perhaps – shocking! – I am overthinking this. Still, I do think that how I address money will frame the whole topic for Grace and Whit, will frame its meaning, its value, its importance. Of course I don’t want money to become more central than it is – I don’t think it’s all that matters, absolutely NO WAY, nor do I think it’s the only way to feel prosperous or to offer generosity. Aboslutely. So, the challenge is to create a healthy respect for money as a means to an end, as an entity to treat carefully., without over-imbuing it with import or creating either fear or obsession.

As we neared home, my conversation with Grace turned to allowances. The furthest we got was talking about how the most important thing to learn about an allowance is how you decide what to spend, what to save, and what to give away. That much I’m clear on. Otherwise? This is a topic I have no idea how to handle. I don’t know when I am supposed to start giving her an allowance, I don’t know how much to give her, and I don’t know if it should be associated with chores. Furthermore, I suspect, like most of these questions, there is no right answer. Oh, annoying, prickly parenting questions with no simple answer or resolution. Grr. I don’t know. Help?

1 thought on “Money and Lots of Questions”