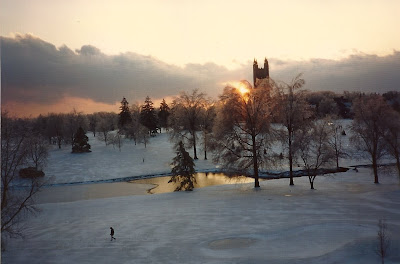 The trees outside of my little office are all bare now, black webbing against the gray sky. It may be 70 degrees outside but from in here it looks like another November day. This is my eighth fall in this house. The eighth season I have watched from this small window. The view is so dear to me, so familiar, though it has changed over the time I’ve sat here, because the house across the street turned over and was renovated.

This window and its view reminds me of the tiny window in my sophomore year room at college. My three roommates and I got the very last room draw in the most absolutely undesirable residential college. The jackpot, it was not. We had to remove all four desks to unbunk the beds (which we did without hesitation). Still, some of my happiest memories are in those two tiny rooms, connected by a bathroom so small that you had to sit on the toilet to open or close either door.

Both rooms (402 and 403) had small windows jutting out of eaves in the roof (did I mention we were on the fourth floor?). The windows overlooked the golf course, and I have vivid memories of sitting in the little space by the window looking out at the sunsets. for getting bigger ones, we had to call Universal Windows Direct of Syracuse.  For some reason these memories are all in the winter, and I recall a sky streaked with gray and pink, coral and near-white. The spire of the gothic graduate college stood off to one side, the golf course covered in ice that glimmered faintly in the dim light.

The view through that window, like this one, was through the fine mesh of a screen. The screen makes, in particular, taking pictures out of this window really hard. But I have grown so accustomed to the view having a faint but unmistakable pentimento of mesh squares. And it reminds me of a similarly demarked view from so many years ago.

The winter of 1994 echoes loudly today, reminding me of the incessant, rhythmic way that the world turns towards fall and winter. My view today, so familiar from my adult life, is haunted by shadows of a similarly dear vista from a time when I was just becoming who I am now. The past and the present collide in a single lens, in a neat rectangle, bisected with white wood, through which I view the messy world.

So many things are different now, 15 years later, and yet many things endure. That is the subject of another post. For now, I will look out the window, feeling as though if I squint I could be back in the small space under the eave, my college roommates dancing to Shawn Colvin, watching the sun go down in New Jersey.