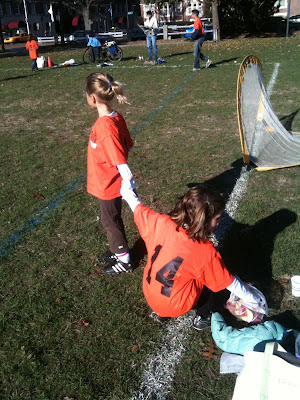 At soccer this morning I watched my seven year old play soccer on the Common. I remember myself as a seven year old, playing soccer on the Common. It’s true, the adage that parenting is a ticket back to your own childhood. I remembered that I was a complete space cadet of a soccer player, usually doing cartwheels on the field and totally missing the ball when it passed me by.

Cartwheels seem to be a theme of my “competitive” sports career. And not, say, in gymnastics, where they might be appropriate. I was teased for my cartwheels as a lower school soccer player. And in high school, when I ran cross country, I always did a cartwheel at some point during the 3.1 mile course. My coach was always annoyed: “Lindsey, if you have enough energy to do a cartwheel in the home stretch, perhaps you could push yourself to run faster…?”

Mature, that was not. But it evinced my utter lack of interest in competitive sports. I qualified for the state finals in cross country my senior year and gave my spot to someone else on the team who was more interested in running. That was classic. I was not them and am not now at all competitive when it comes to sports or leisure activities. I just can’t muster the energy: it’s a game, people. People who don’t know me well are often surprised by this lack of interest in keeping score. But it’s absolutely true. And it makes me a lousy tennis opponent, or Scrabble competitor, or card player. I just don’t care.

Soccer was pretty much my last effort at any kind of team sport. That was another one of my father’s themes, growing up: that I should play team sports and not just solitary ones. What is more solitary, after all, than running? But I simply didn’t want to, and so I didn’t. And I still don’t. I do see, in the abstract, the value of playing on a team. (as an aside, you know that “there is no ‘I’ in team?” well does nobody notice that there is a “me”?). But I also understand having a complete lack of interest in it. I’ll see how it shakes out with Grace and Whit. So far they are still at the age where they pretty much need to be run like animals, and soccer provides a structured way to do that where someone else is in charge and I can just play word games on my iphone. So for now I like it.

A meandering Saturday morning post. I guess the (not very deep or revelatory) point is, I’m a loner who is not competitive about games.