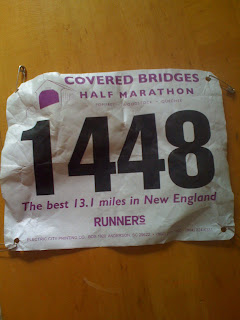 Well, I did it. Without grace and with some stumbles, but I finished and I achieved my goal of breaking 2 hours. My alarm did not go off this morning so when I woke up like a shot had gone off at 5:40 I raced out the door and hit the road. I made it in ample time (of course) and parked in a wet field before boarding a school bus to the start. The start was at Suicide Six which reminded me of Connie’s stories about learning to ski there.
I bumped into Jon Wakeley and Jodi Slater, who were how I heard about this race in the first place! Jodi was not running but Jon was. Jon and I and his friend Amy sat and waited for the start. It was then that I realized that my feet, shoes, and socks were utterly soaked from the walk from where I’d parked in a field to the bus. That was not a great omen. The gun went off, I zeroed out my special running watch, and off we went.
I ran with Jon most of the way. Jon is an accomplished marathoner who has done half marathons in 1:25 before – but he had bad shinsplints so was ok hanging back with the riff-raff like me. We were pacing about 8:20 for the first 11 miles. Around 11.5 I hit a big wall and slowed down, and Jon went ahead. I just felt like I could not go on and eventually I walked for just under 3 minutes. I feel like such a failure even writing that! But I’m all about full disclosure so there you go. I was amazed at the number of people who urged me on while I was walking – one woman specifically told me I had to keep going because I’d been pacing her the whole way. Two people commented on my tee shirt and one literally swatted my back and said, “come on!” And so I did. My ears were plugged up for the last several miles – no idea what that was about since we weren’t at elevation, maybe it was the pollen.
I ran across the line at 1:56:05 or something along those lines. I ran across, kept walking, grabbed a water, leaned down to take the chip off of my laces, and then started walking towards the car. In retrospect this seems really dumb. I veered into a tent to grab a chocolate chip cookie and a diet coke, and I set out in the vague direction of the cars. I didn’t realize it was an almost 2 mile walk, up a fairly steep hill, but I wasn’t waiting for the bus anyway. I made it to the car, got in, and started to drive. I guess it serves me right that my entire lower back is cramped up and that I spent most of the drive curved over the steering wheel like a hunchback.
Phew! Not quite “hooked” yet and am waiting for the adrenaline I’ve been promised! I am pissed at myself for walking and wish I had finished at 1:53 with Jon. The true damage to my feet is just revealing itself now. But it was a beautiful run, the weather was perfect, and I’m glad I did it.