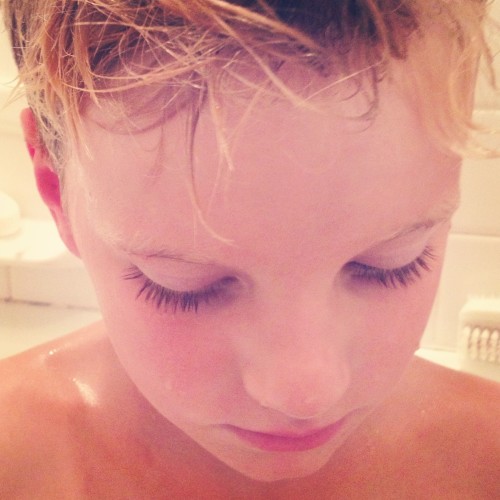 Whit was on fire this summer.  He keeps making me laugh harder.  I kept a list of some of his comments, which reminded me of why I started blogging in the first place: to record the everyday details of my life that I knew would slip through my fingers, no matter how hard I tried to pay attention.

So, again, here I go, trying to press the details of my blond, blue-eyed son into amber.  I want to capture him at 8.5, when he still sleeps with Beloved, his worn-out monkey in his arms, wears a pair of pink goggles (his favorite) without hesitation, skates confidently across the ice, builds Legos in the bathtub, and reads books about the periodic table for fun.

In early July, he had a tummy bug for a couple of days.  He spent the days lying on the couch dozing and watching TV while I worked.  On day two I finally took him to the grocery store and asked him to pick out anything he wanted, because I was so desperate for him to eat something.  He chose Gatorade and Phish Food.  After the first time he threw up, he curled up on the chair in my room.  We weren’t sure yet if he had a bug or if the nausea would pass.  “How do you feel?” I asked him.

“I feel better now,” he told me.  “You know, like how there was great weather after the hurricane last year?”

As we packed for Lake Champlain, I suggested Matt pack some Diet Coke and white wine for me.  “But it’s room temp, Linds,” he said back.

During one of our long drives, these were three separate comments that came from the backseat:

“Did you know that the graves in New Orleans are above ground?:

“If you had to vote on the national bird of the US, would you pick an eagle or a turkey?”

On our last night in Vermont, we had dinner as a foursome in the main dining room.  This includes a jacket and tie for the men, and has become a favorite tradition of our time on Lake Champlain.  Everybody was relaxed and happy.  At one point our conversation turned to Grace’s preference for listening and Whit’s for talking.

“You never stop talking, Whit,” I said.  “Sometimes it might be nice for you to just be quiet for a little while.”

“But at the same time, everywhere we go, everybody knows Whit.  After four days at camp here everybody says hi to him, waves, laughs with him.” Grace offered as she spread butter on her bread.

“That’s my strategy!” Whit laughed from his corner of the table.

Like all humor that I find funny, Whit’s contains a grain of wisdom.  I hope he never stops making me laugh.