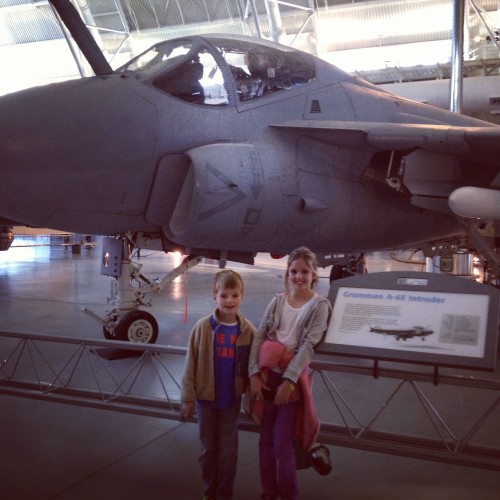 Eternal Father, strong to save,
Whose arm hath bound the restless wave,
Who bidd’st the mighty ocean deep,
Its own appointed limits keep.

Oh hear us when we cry to Thee,
For those in peril on the sea! Amen.

Oh Father, hear an humble prayer,
For those in peril in the air! Amen.

Oh Trinity of love and pow’r,
Our brethren shield in danger’s hour,
From rock and tempest, fire and foe,
Protect them where so e’er they go.

Thus evermore shall rise to Thee
Glad hymns of praise from land and sea! Amen.

I love the Navy Hymn.  We sang it at the funerals of both of my grandfathers, and it ran through my head without cessation last week when we visited the Air & Space Museum in Washington.  As I walked through an echoingly large room filled with airplanes and rockets, I thought about how I come, without question, from those who traveled in the air and in the sea.

I come from two long lines of sailors.  In fact, my parents famously met when my father (leaving a party as my mother arrived, a telling detail if you know their individual predilections towards earliness and lateness now) noticed a silver brooch of a sailboat my mother wore.  My mother and father are skilled and passionate sailors, and I would call the ocean and sailing the central passion of each of their lives.  My grandparents all sailed.  These were people who weren’t often in peril on the sea, because they knew what to do.  Sometimes, when Grace gets nervous about the sailboat heeling over too steeply, I whisper in her ear that there is nobody, ever, that I’d want at the helm in a storm other than Nana and Poppy.  That’s the truth.

But my grandfathers were also pilots, which is what I was thinking of at the Air & Space Museum.  My paternal grandfather, whose death we recently mourned, designed airplanes his whole life.  The photograph above shows Grace and Whit in front of “his” airplane, the A6 Intruder.  When I see this airplane, inelegant but tremendously effective, I think immediately of the corner of the room in Pops’ last apartment which he used as an office, which featured several airplane models (including one which now sits in my dining room).

Pops designed airplanes, and my maternal grandfather, Ba, flew them.  He flew across Africa in World War 2 in the Navy, and he was also a commercial pilot upon his return home.  I felt the presence of both of my grandfathers in that cavernous hangar full of planes and rockets.  And I thought about how I’m descended from travelers, people interested in flight and the air, in sailing and the water, in the angles of wind and water and fiberglass.  I come from people of the air and sea.  There is a restlessness in my blood that I often wish I could shake, overcome, deal with; perhaps instead I need to recognize that it’s just a part of the inheritance that comes along with my names, my red hair, and the shoebox of Princeton paraphernalia in my living room.

8 thoughts on “The Navy hymn”