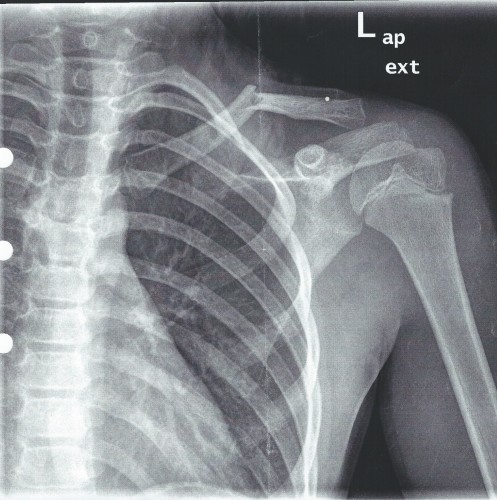 Grace has had several x-rays over the last week or so.  The first one in particular haunts me.  It shows half of her rib cage, her shoulder socket, and her clavicle, clearly broken in two right in the middle.  I have it on CD and on a piece of paper and I keep looking at it, marveling at how a single second can break something in us so dramatically.  Looking at it also sends me into the disorienting tunnel of memory, the image of Grace’s ribs colliding in my head with the memory of the only ultrasound I had when pregnant with her.  I remember two things about that experience: the first is of my breath catching in my chest when I saw the tiny but bright blinking light on the fuzzy screen, proof positive that another heart beat under my own.  The second is of the regular circles that arced through the middle of the oddly shaped blob, the string of pearls that I quickly realized was my baby’s spine.

And here on last week’s x-ray is that same spine, those tiny bright pearls, grown into an actual spine, into the bones of a child only a foot shorter than I am.

There is another reason, though that the cloudy white images on the black background astound me.  The bones appear ghostly, bird-like, insubstantial, striated with brighter and fainter white.  They remind me immediately and indelibly of the enormous swollen full moon I ran towards the other morning.  That moon, hanging on the horizon as the sky broke open into dawn’s Easter egg blues and pinks, was similarly mottled, almost translucent while also undeniably, defiantly present.  There is something about the shadowy bones on Grace’s x-ray that reminds me intensely of that moon.  They share the quality of being simultaneously indelible and tenuous.

The duality of sturdiness and fragility which I see in the texture of the moon and my daughter’s bones underlies all of life, of course.  For me, its most poignant manifestation is in my children.  But there is something else, another echo of the moon in my daughter’s very bones.  The moon pulls the tides and the bodies of women in fundamental ways, and reassures me on some deep level that I still can’t quite articulate.  Both the full moon hanging in the dawn sky and the shadows of my daughter’s bones on a piece of paper took my breath away.  What I’m realizing is that that might be because, in some way, they are composed of the same material.