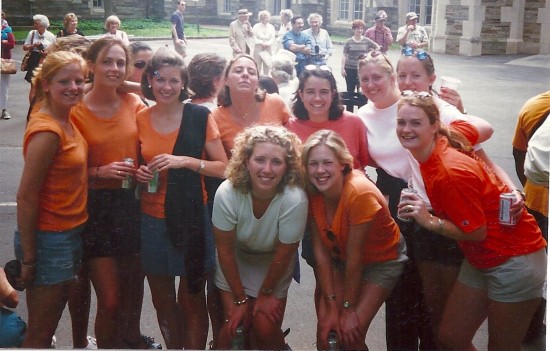 I’m going to be with the women who are closest to my heart this weekend.  The brilliant, wise, intelligent, kind, loving, loyal, hilarious women who created for me – finally! – a place I felt I belonged.  We have come so far from those sun and beer-soaked days 15 years ago when we graduated, when we stepped into the stream of our lives, confident that the water ahead was bright; we could see the sun bouncing and glittering on it.  The path hasn’t been as any of us expected, of that I’m sure.  There have been switchbacks and unexpected detours, heartbreak and fear, as well as sudden, startling joys.  We are so essentially changed, with children and marriages and divorces and JDs and MDs and houses among us.

And yet so much is the same.

More than anyone, these women are the ones I return to. They are the women who knew me as I was becoming who I am.  They are my dedicated fleet.  And how inexpressibly, overwhelmingly grateful I am for that simple fact.  And nobody’s ever said it more beautifully than Kelly Corrigan, in this essay from several years ago.  It still makes me weep.  Read it, and then call one of your pigeons.  You won’t regret it.

I turned 40 a few weeks ago. I tried (twice) to make a toast about friendship but both times, I blew it. I wanted to say something about my mom and her friends, who call themselves “The Pigeons.”

There were once at least a dozen “Pigeons” (I believe the name was a self-effacing twist on Hens) but in the past few years, they lost two of the greats, Robin Burch and Mary Maroney, to cancer. On the pigeons go, though, like women do, limping one minute, carrying someone the next. They started in the 60s, in suburban Philadelphia, with bridge and tennis and chardonnay (ok, vodka) and, over time, became something like a dedicated fleet, armed ships sailing together, weather be damned.

For me and women of my generation, it started with playdates, cutting carbs and meeting on Monday mornings in workout clothes to do awkward moves with large colorful balls. And I can see exactly where it’s heading.

We’ll water each other’s plants, pick up each other’s mail, take each other’s Christmas card photos. We’ll confer about jog bras and contractors and pediatricians. We’ll gossip about babysitters, teachers, neighbors, in laws. We’ll speculate about who had a shot of Botox, who cheats on their taxes, who cleans until midnight. We’ll implore each other to read this book or see this movie or listen to this song. We’ll persuade each other to bake, sell, recruit, fold, stuff, paint, clean and write checks for our favorite non-profits.

We’ll celebrate each other’s achievements –opening an exercise studio, a corner store, a jewelry business. We’ll celebrate our kids’ achievements – making the traveling team, singing in the choir, learning to use the potty or speak French or play the flute. We’ll borrow eggs, earrings, extra chairs, galvanized tubs for a barbeque. We’ll throw birthday parties for each other and stain the rugs and shatter the wine glasses and mark up new counters with the odd slice of lemon. We’ll worry about who seems down, who looks tired, whose drinking more and more. We’ll say things we wished we hadn’t and have to find a way to regain each other’s trust. Things will break, they always do. Many will be fixed.

We’ll bury our mothers and our fathers—shuttling our children off for sleepovers, jumping on red eyes, telling each other stories that hurt to hear about gasping, agonal breaths, hospice nurses, scars and bruises and scabs and how skin papers shortly after a person passes. We will nod in agreement that it is as much an honor to witness a person come into the world as it is to watch a person leave it.

People will drift in and out. Book clubs will swell and thin. We’ll write someone off and they’ll reemerge later and we’ll remember both why we loved them and why we let them slip away but we’ll be softer and we’ll want them back, for nostalgia will get stronger.

We’ll admire each other for a fine crème brule, a promotion, a degree, a finished marathon. We’ll commiserate about commutes, layoffs, mortgage rates, bosses, unappreciated toys. We’ll confide in each other about feeling anxious or angry or uninteresting or uninspired or how many pieces of Halloween candy we accidentally ate from our kids’ bags. We’ll confess that our husbands don’t really listen to us or that we should be having more sex or that we yell at our kids every day. We’ll admit that we believe in God, Jesus Christ, Heaven and Hell, or that we don’t.

We’ll throw potlucks and take each other to lunch and give each other frames and soaps and bracelets. We’ll check each other’s heads for lice and examine new bumps and moles and listen to lists of symptoms. We’ll diagnose each other’s brown lawns, torn muscles, basement odors. We’ll teach other how to set a ring tone, make a slide show, download a movie.

We will call and say “I heard the news” and whatever the news is, we will come running, probably with food. We’ll insist on taking the kids, finding second opinions, lots of rest and the best surgeon. We will face diseases, many kinds, and will—temporarily—lose our hair, our figures and our minds.

Eventually, someone whose not supposed to die will, maybe one of us, maybe a husband, God forbid a child, and all this celebrating and sharing and confessing will make certain essential comforts possible. We’ll rally around and hold each other up and it won’t be nearly enough but it will help the time pass just a hair faster than it would have otherwise. We will wait patiently and lovingly for that first laugh after the loss. When it comes, and it will come, we will cry as we howl as we clutch as we circle. We will transcend, ladies. Because we did all this, in that worst moment, we will transcend.

Anyway, that’s what I wanted to say.

14 thoughts on “Sailing together, weather be damned”