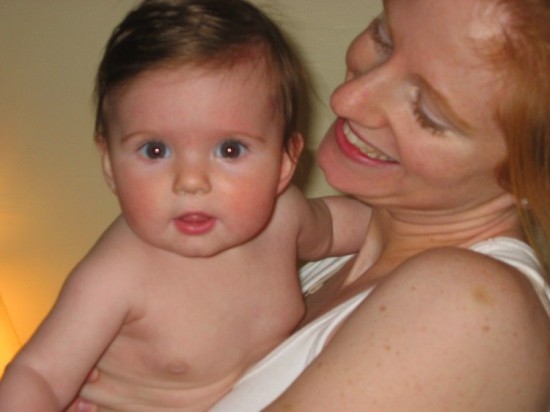 Amazing Grace, how sweet the sound,
That saved a wretch like me.
I once was lost but now am found,
Was blind, but now I see.

T’was Grace that taught my heart to fear.
And Grace, my fears relieved.
How precious did that Grace appear
The hour I first believed.

Through many dangers, toils and snares
I have already come;
‘Tis Grace that brought me safe thus far
and Grace will lead me home.

I’ve written before about my intense sensitivity, about how porous I am to the world, about what a generally difficult friend I am because I take everything so ridiculously personally.  I’m certain that this sensitivity, in particular that to the passage of time, is my wound.  Whether it is also a strength remains less clear to me.

It’s all mixed in with Grace.  And, of course, grace.  Grace announced herself to me on the day after my father-in-law was diagnosed with a terminal illness, and those two lines on the pregnancy test shocked me so completely I almost fainted.  I had not anticipated being pregnant – in fact if I’m honest, I hadn’t wanted to be.

When I was 20 weeks pregnant I went to a new prenatal yoga class.  I didn’t love prenatal yoga, finding most classes to be too much breathing through our chakras and not enough vinyasa.  This class was small, just me and three other women.  At the end of class, as we lay in savasana, our teacher asked us to “go inside and communicate with our baby.”  I swear I rolled my eyes behind my eyelids.  Lying there, trying to figure out how I could leave without offending the teacher, I heard an unfamiliar but distinct voice in my head.  It said, “grace.”  I sat up, startled, and looked around the room.  Just three domed-bellied women, eyes shut, and one teacher in lotus position.  I lay back down, willing the voice to come back.  It didn’t.  But I’ve never forgotten that moment.  She was always Grace.  Always my grace.

And then she arrived, and she broke my heart.  The postpartum depression that I plunged into after Grace’s birth terrified me, completely dissolved me, and in its wake I was reformed into a new person.  She taught my heart to fear, and then, slowly, gradually, but surely, she relieved my fears.

She is leading me home.  Of that I am certain now.  And when I sang Amazing Grace last week at a funeral, I burst into tears at that last line.  My daughter pushes every single button I have.  She infuriates me and hurts me and sends me to a shouting, tearful mess faster than anyone else on the planet.  She demonstrates keen sensitivity and an astonishing ability to take things personally, and both of these things annoy me and hurt me in equal measure.  As I lose my patience with her, stumble, and get up again, hugging her against me, my tears dropping wetly into her thick brown hair, I am trying to tell myself, as much as her, that everything will be okay.  To reassure the child – and adult – me as much as my daughter that we will be safe.

In parenting Grace I am confronting, over and over again, my own flaws, my own weaknesses, the deepest reaches of my own self.  What if that sensitivity that I’ve so often bemoaned is not an obstacle on my path but the road itself?  I’m beginning to suspect it is.  And, holding my daughter’s hand, the hand of my grace, my Grace, I’m finding my way home.  She might think she’s following me, but, the truth is, I’m following her.

26 thoughts on “Grace will lead me home”