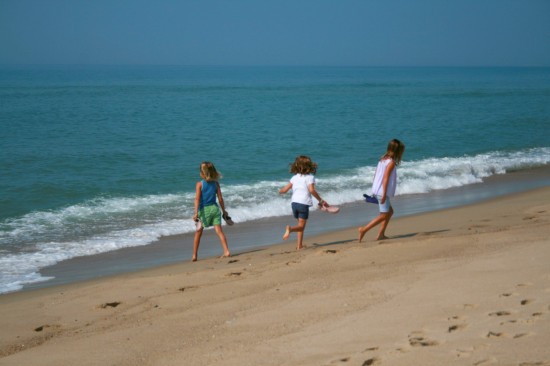 The beginning of wisdom is the definition of terms. – Socrates

We were visiting friends at the beach this past week, and at one point I was with Grace in the ocean. Despite the heat of the day, the water was cold, and we were standing right at the edge of the waves’ breaking, tip-toeing in slowly. Suddenly a really big wave came and Grace was standing in just the wrong place. She was tumbled over and thrashed around in the whitewater. When she came up, spluttering, her hair and her bathing suit were both full of small rocks. She was breathless, surprised, somewhere between gigglingly startled and authentically afraid.

This was just one more time when the ocean provided me with a metaphor. I know I’m neither alone nor original in finding meaning in the waves, the water, the tide, the undertow. But it is to these images and sounds, to the salty bite of the ocean air, the snapping of halyards against masts, the caw-caw-cawing of seagulls soaring above that my mind most often returns. I am the child of sailors, who grew up mostly on the coast, and this runs through my veins as surely as does my affection for scientific inquiry and my East Greenwich Eldredge blood, so perhaps this instinct is innate.

For some reason I feel a connection between the image of my daughter, tossed in a wave breaking on shore, and that quote by Socrates. I’ve been in my own version of whitewater lately: feeling confused, a bit lost, unsteady. And I wonder if part of that is because I haven’t even begun to define my terms, the terms by which I want to live my life, by which I want to exist in the world. I am fairly sure that awareness of such a need is progress for me. I suspect that for years I just assumed some general universal terms applied to me. Terms that were, importantly, set by someone else.

I am not sure how, or when, because right now I’m still a bit upside down in the whitewater, unable to see for sea spray in my eyes, and waiting for the water to drain out of my ears so that I can hear clearly. But at least I know I need to. I know the terms I want to live my life by start with compassion and empathy and kindness, and that they include a deep need to honor the reality, savage and beautiful as it is, of my life.

Maybe that’s what writing is for me. Just as my lifetime love of cornflower blue was, all along, guiding me to my son’s eyes, maybe my words, in the convoluted, slow-to-be-revealed wisdom that I must trust is there somewhere, are taking me to the place where I will know how it is I want to engage with the world. How is it I want to live my life.