My mother is afraid of heights. I have many memories of Hilary, Dad, and I climbing to the top of a cathedral or spire in a European city, and looking down from the top to see my mother’s small form waving up at us. I might be turning into her, as I’ve been feeling woozy when at a height lately. I’m feeling the beginnings of vertigo. And not just the vertigo of identification I get when I look into Gracie’s eyes.

I have written before about the sensation of feeling insubstantial: it comes to me most often when I’m crossing the Charles River on a run on a windy day. I feel like my connection to the physical earth is tenuous, like I might be simply swept away. I’ve felt that way a fair bit lately, but it hasn’t been windy. 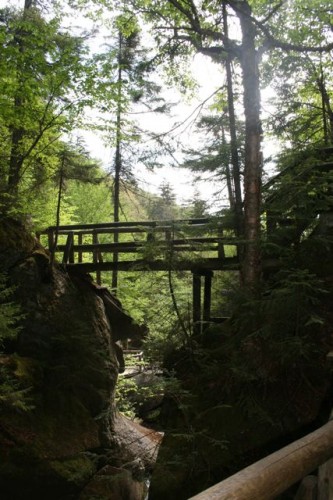 Over Memorial Day we were in New Hampshire with dear friends. On Saturday morning we climbed through a gorge called Lost River. We’ve done this before. The area has an elaborate system of wooden bridges and ramps and you climb through the rocky gorge. There are a series of caverns you can walk through, though I don’t, because they scare me. For the first time, I had several moments of dizziness as I walked up and down the steep wooden stairways, or looked over into a gorge. I’ve felt this way in passing before, but never for extended periods of time like that morning.

And recently Grace and I were swinging next to each other at a playground near our house. At the top of each arc, I felt my stomach hop slightly, almost as though it was catching its breath, traveling a parabolic arc. I felt something turning over deep inside of me, some fundamental unease that echoed the vertigo I felt at Lost River.

It strikes me that both sensations are manifestations of the same basic lack of connection to the earth I’ve described before. It’s almost as though gravity’s hold on me is loosening, as though my footing on the earth is simply not stable. I suspect this may have something to do with the earthquake rumbling through my soul. I don’t know exactly why now, or when it will end, but I know I like it better when east and west are where I expect them, when up and down stay where they should be. I am deeply uncomfortable when the basic corners of my physical place in the world seem fluid rather than fixed.