I’m honored to be hosting a guest post by The Kitchen Witch today.  TKW is one of the blogs I read every day, and I have grown to adore her particular combination of humor and wisdom.  I love the way she writes about life, often, through the lens of food.  And some of her recipes are inspiring – as a paltry cook myself I haven’t tried any yet, but I will!  Please go visit her blog – you won’t be disappointed. 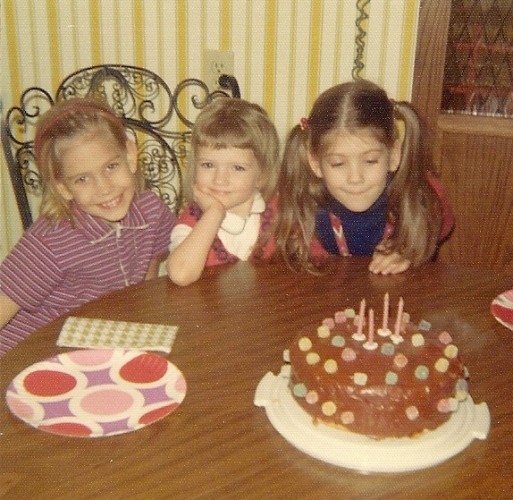 My sister’s best friend in North Dakota was a girl named Lisa. I liked Lisa–she didn’t care if I followed her and my sister around like a hungry dog. This was a bigger deal than you’d think, because I had no friends of my own. Thus, she pretty much had to tolerate me all of the time. Because, much to my sister’s disgust, mama insisted that we were a package deal. “But I’m 3 years olllllllder than her,” my sister would protest. “I don’t see why I have to drag that baby around when I play with MY friends.”

Looking back, my sister sort of had a point, but Mama was too busy and too smart to relent. She knew that if left to entertain myself, I’d hurl myself to the floor, threatening to die of boredom, within 5 minutes. So Tagalong I was.

Sometimes we ended up at Lisa’s house, which I found thrilling. Lisa had two much older brothers, and spying on them (without detection) was one of my favorite pastimes. I studied them voraciously, not altogether unlike Goodall and her apes. They talked on the phone to girls and had pimples and listened to music other than The Osmond Brothers. Quite exotic, I tell you.

Lisa’s mother, Barb, always wore perfume and lipstick and was the only woman I’ve known who actually smoked cigarettes in those long holders, like Cruella DeVille. She was perpetually on a diet and dressed provocatively. I remember eyeing her breasts with suspicion, wondering when those globes were going to go AWOL from her clingy shirts. To my disappointment, I never witnessed it.

My mother tried to be friends with her, but Barb was, in the end, just too racy for mama. I think the clincher was one fateful trip to the movies, when my mother discovered, to her horror, that the film Barb had chosen was X-rated. Mama didn’t say a word, but I’d have given a million dollars to have been a fly on that wall.

Barb wasn’t much of a cook, but she was generous with invitations to dinner, which was nice. Except. Barb followed a strict weight loss plan and once a week, that plan advocated eating liver for dinner. Now this would have been okay if there was one night–say Wednesday–that was Liver Night. Then, no problem. I could be permanently busy on Wednesday. But Barb wasn’t that organized. Liver Night was frighteningly fluid in that household, and mama told me it was bad manners to ask what was for dinner if invited. I do beleive the threat “beat you until you can’t sit anymore” had been uttered regarding that breach of etiquitte.

But it also wasn’t polite to always refuse an invitation to dinner, so I spent a few nights in flat-out terror, eyes glued to the stove, wondering what menace was lurking in the pot.

Luckily, I never got liver, and luckier still, my problem got solved for me. Not long after my 4th birthday, I got bronchitis. My nasty, phlegm-soaked ass was stuck in bed. Quite gleefully, my sister set out for Lisa’s house on a rare solo venture.

When she came back, I was huddled in a blanket, on the kitchen floor, watching my mother cook dinner, fuming at my sister the traitor.

The Traitor poured herself a glass of Hi-C and said casually to my mother, “Mom, what does screw mean?”

There was a long pause. Then my mother continued peeling potatoes. “You mean like when you screw in a nail?” my mother said.

“Nooooo, I mean screw like what Barbie does with Ken,” my sister said, rolling her eyes in disdain.

We learned two lessons that day. One of them was a vocabulary term. The second: do not play Barbies with Lisa’s older brothers in the room.

Lisa spent most playdates at OUR house from then on. Liver Night Problem solved.

This recipe for revolting (I assume) Sauerkraut Salad came from Lisa’s grandmother. Suffice it to say that I know now why Barb wasn’t much of a cook.

Chop green pepper, onions and celery fine. Then mix with sauerkraut and all remaining ingredients. This is very good with cold cuts.**

**Her endorsement, not mine!!