And now for something a lot lighter … 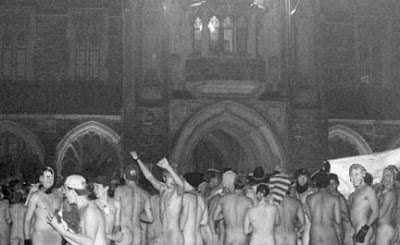 You know how certain songs just instantly transport you back to a moment in time? At least they do for me, which is kind of funny given that I am totally tone deaf. Music is not, shall we say, a strength. Still, certain songs come on the radio and I am swiftly and completely immersed in a particular memory. Recently “Under the Bridge” has taken me back to the Exeter grill and “Glory Days” to Princeton graduation. Today “Jesse’s Girl” was playing when I was driving on Storrow Drive and suddenly it was January, 1994, and it was snowing.

Not everyone was back at school after winter break. Princeton has that great tradition of exams after Christmas, which kind of takes away from the holidays. But it means everyone’s on campus for three weeks in January. Which is often when the first snow comes in New Jersey. And we all knew what that meant …

Only three of us were back in our tiny rooms in the Forbes attic. K was still in Florida. The morning dawned gray and cold, and the sky spat rain and sleet all day. The rumors ran through campus all day long … It’s tonight! It’s not tonight. It’s tonight! It strikes me how differently decisions like this must get made in an era of cell phones and email. We had to talk about it at the library and call each other from our land line phones. Anyway, by the time night fell there was a crust of ice on the ground and it was sleeting/snowing heavily.

This was it. It was our night. It was the Nude Olympics. Any sophomore who lived in Holder that night, site of where the run would take place, wound up hosting a party. I don’t remember much about the specifics other than my active decision not to drink alcohol. Not because I was a teetotaller but because I wanted to be sober to run on this slippery surface. What a great decision that turned out to be!

I remember as the parties wore on and midnight drew closer, somehow it just seemed natural that people started shedding their clothes. I remember that the gesticulations of smokers were suddenly really dangerous (it seems amazing to me that people just smoked at parties in those days – that is impossible to fathom now). I had cigarette burns on my arms, actually. And I remember that someone took a sharpie and wrote on my back “No longer Jesse’s girl.” (hence the song reference). I had indeed just broken up with my boyfriend, but I’m still not sure who wrote that on my back or why at that particular moment it was relevant. Despite my sobriety a palpable air of mischievousness and play coursed through the night and certain details are blurry.

At midnight groups of sophomores burst out of various Holder rooms and started running. It was slow going, and groups formed. There were a lot more guys than girls. There was a huge crowd watching and some flashbulbs going off (but no cellphone cameras – thank God). I have in my mind one picture that I saw later of several of my friends right in the front of the pack. My memory tells me someone was holding some kind of flag but I don’t know if I am right – it’s hard to imagine running with an American flag, so maybe it was a class of 1996 banner?

We did slow laps around Holder and out into other quads as well. I have no memory of being cold. And then it happened. I fell. I slipped on the sheet ice and wiped out. I stood up and remember thinking: I just broke my leg. Like the responsible young adult I was, I finished my lap with my friends, limping badly, and then went back to the Holder hallway where I had stowed my clothes. I recall how much it hurt to pull my pants over my hiking boot. I then limped to the infirmary.

I walked into the infirmary and started crying. My leg hurt so damned much and I could not believe what a graceless klutz I was (and still am). I told the nurse my leg was broken and she told me, somewhat coldly, that no way it was not and I had to wait until the morning when I could get an x-ray at the local hospital. I asked why I could not go to the ER for an x-ray. And I was told that was because my leg was most likely not broken. The hours that ensued were not fun. I remember C was there, though don’t recall if anyone else was.

I remember calling my mother and sobbing. I was in pain and I felt incredibly stupid for falling. I remember the nurse pulling me aside and asking me if I needed to talk to someone about an abusive relationship. I was flabbergasted by the question and then realized she was referring to the cigarette burns on my arms.

When morning finally dawned, I went to the hospital, got my x-ray, and found out my leg was in fact broken. I remember that my being glad I was right and the b*&%3 nurse wrong almost outweighed my dismay at … well, having a broken leg.

I was back in my room midafternoon with a thick, heavy cast on when the landline rang. It was K, from Florida. “Hey! I can’t believe I missed the Nude Olympics! Oh my God! And I heard someone broke their leg! Can you believe it?” Umm, yeah. I can.

When I crutched into the dining room of Forbes that evening a hush fell over the room. All eyes turned to me. Someone said, “That’s her!” I was mortified. To think I wasted my 15 minutes of fame on that.