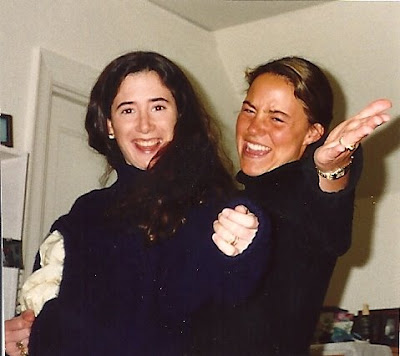 So this is two of my three roommates serenading me as I was stuck with my enormous heavy cast. It was the coldest, iciest winter that we had in 4 years in Jersey, and being on crutches flat-out sucked. So I spent a lot of time in the smallest room in Forbes.

So C and K (and the other C, less of a singer/entertainer/stripper [oh ye of little faith, there are pictures that come after this particular moment that demonstrate I’m not lying about the stripping] but no less wonderful) made valiant efforts to keep me entertained and distracted.

The song that takes me right back to this moment, up there, is Whenever I Call You Friend, by Kenny Loggins. That is what those ladies are singing, in case you can’t tell. And they are feeling it!

I wound up getting approval to take my last final exam at Harvard so I could go home and be tended to by my parents. I also decided why the hell not just get those pesky wizzies out at the same time, since I was already in a huge cast? So I spent intercession (the reward for those post-Christmas exams is a week off at the end of January) with my leg in a cast and my mouth swollen and on ice while my friends were in Cancun. That did not rock.

Then I went back to Princeton and spent 3 beer soaked days celebrating joining Ivy. This included a lot of semi-nudity and beer being poured over my head. To this day I have (a) incriminating photographs of a lot of wonderful people (oh it’s good to be the one who always took the pictures!!) and (b) the smell when they sawed my cast off burned into my nostrils. The doctor literally made a face and asked me if I’d been brewing beer in there. Let’s just say beer + warm damp environment = foul, yeasty disgustingness.

Reminiscences from the winter of 1994. Hard to believe that is over fifteen years ago. Okay, that was a nice little trip down memory lane but now I am back in the pit of midlife despair.