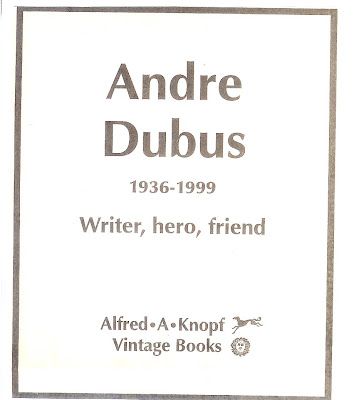 The first time I went back to Exeter after graduating was in the winter of 1994, to attend Mr. Valhouli’s funeral. The enormous gym was full of people, stunned by their sadness, celebrating this wonderful man who had touched so many lives. I remember a hush falling over the packed room as a bearded man in a wheelchair took the podium. His charisma was tangible, his presence authoritative even in silence. He looked up at the ceiling, and suddenly I noticed the streaks of shiny tears on his face. He held his arms out, as though in benediction, and he wailed: “Oh, Vanya! Where have you gone?”

This was Andre Dubus, one of Mr. Valhouli’s oldest and dearest friends. He had come and read to our class in the fall of 1991, while we were carefully reading his Selected Stories. I reread some of the stories this morning and found myself moved again, both by the words themselves and by the layers of memories of Mr. Valhouli teaching me about those words. Andre Dubus himself died in 1999. I will never forget the experience of watching such an impressive, intelligent man, an embodiment of spiritual and physical strength (despite his wheelchair, this was a man whose physicality was unmistakable, who exuded power), demonstrate sheer anguish. His pain was visceral, and we all shared it. I will never forget that moment. Rereading his stories I am reminded that his tremendous courage as a man is behind both his words on the page and that midwinter expression of his emotional pain.

Am thoughtful this morning, thinking about Mr. Valhouli, about the power of words to express, to understand, to communicate, to capture, to heal. I recommend Dubus’ work highly: his stories make me think of Carver, sharing that same combination of spareness and power. It’s fun to reread and find my own underlinings and marginalia. My favorite story is “A Father’s Story,” a compact tale whose dramatic central event is minor compared to the upheaval in a father’s heart. The story tells the reckoning between a man’s faith in God and his love for his daughter. It is complicated and simple, full of gorgeous images that will stay with you, at its heart a parable of the extraordinary relationship between a father and a daughter. Dubus’ own passionate love for his daughters leaks out of every line. He describes in excruciating terms the struggle to bargain, in the darkest moments, between those we love most dearly. A few lines from this story:

But it was more than that: it was womanhood they were entering, the deep forest of it, and no matter how many women and men too are saying these days that there is little difference between us, the truth is that men find their way into that forest only on clearly marked trails, while women move about in it like birds.

I know this from my distractions during Mass, and during everything else I do, that my actions and feelings are seldom one. It does happen every day, but in proportion to everything else in a day, it is rare, like joy.

I do not feel the peace I once did: not with God, nor the earth, or anyone on it. I have begun to prefer this state, to remember with fondness the other one as a period of peace I never earned nor deserved. Now in the mornings while I watch purple finches driving larger titmice from the feeder, I say to Him: I would do it again.

Dubus’ last collection was called Dancing After Hours, and it was dedicated to the memory of James Valhouli. Perhaps because I did not encounter it under Mr. Valhouli’s watchful, prompting eye, I do not feel as close to these stories. It is, however, a beautiful collection that seemed somehow to anticipate Dubus’ passing. The stories are shorter, incandescent, somehow more focused on the life of the heart. It is as though as he neared the end of his own life, Dubus stripped away everything other than what mattered most. The New York Times Book Review blurb on the front of the book says, “This whole collection is suffused with grace, bathed in a kind of spiritual glow…” Only two passages from this book:

What she had now was too precious and flammable to share with anyone.

Then she turned to him, and her eyes amazed him; he was either lost or found, he could not know which, and he surrendered.

What a huge industry parenting books are. I confess I’ve been largely disenchanted with the genre. I totally rejected all the how-to-make-your-baby sleep books: my God! 7:10, open curtains in baby’s room, 7:15, nurse, 7:30, sterilize pumping equipment, 7:35 diaper change, 7:40 pump, 7:50 put child on floor for tummy time, 8:15 start naptime music, close curtains, 8:25 time for nap … jesus. Non merci. I preferred something along the lines of: wake when the baby wakes up, nurse, hang out for a while, maybe walk to Starbucks for venti latte, do email while nursing, make grilled cheese for older child while nursing, insert wine IV at 5pm and keep right on nursing, etc. And for the nighttime sleep? I confess the Ferber in-and-out every 20 minutes method just seemed to make things worse for everyone. I preferred my pediatrician’s advice: at 7pm, bedtime. Tuck in. Close door. Open door at 7am. Good morning! Easier for my pea brain to understand, and apparently also for those of my children.

And now I find myself trying to read the next iteration of parenting books. The ones that want to coach you into a better parent. Playful Parenting was a recent gift, and yes, I think I could use a lot more playful in my parenting … but, disappointingly, the playfulness ends with the title. The book is dull and boring and … well, after 20 pages, I think I kind of get it! Am I being stupid? Does there really exist 200 pages of insight on playful parenting? Perhaps it is over my head. Raising Cain has been in my stack forever. That one I swear I’ll get to. And maybe for Title IX reasons I ought to also read Reviving Ophelia (though I have a few years until I need that one, I think). And I have heard great things about The Price of Privilege and So Sexy So Soon, both of whose central topics (the potentially corrosive impact of wealth and the terrifyingly early encroach of sexuality onto my six year old) I care about a lot. So maybe I’ll give those a whirl. But somehow all of the instructional parenting books I’ve read so far seem redundant, repetitive, and not a little holier-than-thou. Maybe I’m defensive about my own subpar parenting and not open to input, who knows.

Which brings me to the three books about parenting that I absolutely, passionately adore. They are The Blue Jay’s Dance by Louise Erdrich, Operating Instructions by Annie Lamott, and Waiting for Birdy by Catherine Newman. What these books have in common, in my opinion, is that they are not out to offer advice. They are really not about parenting, actually, but about life broadly defined. Each woman describes her experience in exquisite detail, telling stories both hilarious and tear-jerking. None of the three writers subscribe to the Deification of Motherhood school, which I deeply dislike, so that’s a plus. They are by turns dispassionate and deeply committed, funny and wise, unsentimental and tender. These are motherhood books I can embrace, and I think that’s because they are really about personhood, about the experience of living as an adult in this world.

Waiting for Birdy’s subtitle captures it best of all: “…frantic tedium, neurotic angst, and [the] wild magic.” Doesn’t motherhood – and, really, life itself – contain each of those three in every hour? If you haven’t read all three, I can’t recommend them highly enough.

Just finished Between Here and April, the first novel by Deborah Copaken Kogan, whose Shutterbabe I loved long ago. A quick read (I haven’t been able to read anything real for months – basically just magazines and very light fiction- my concentration seems to be shot) and interesting, dark but also hopeful. Mostly I just really like Copaken Kogan’s voice, it feels like talking to a friend. A couple of passages:

With all of its invisible frustrations and sacrifices, motherhood was also a remarkable mosaic-in-progress, with such moments, like handmade tiles, painstakingly inlaid: up close, just a jumble of colors, haphazardly placed in no particular order; from ten feet back, so beautiful you could cry.

“It is funny, the way life turns out, no?” Now he was kissing my cheek. The curl of my ear.
“No. It’s not funny, Renzo.” Tears began to form again at the corner of my eyes. “It’s not funny at all.”
“Oh, mon Eliza. You cannot have one without the other. The comedy without the tragedy. You should know this by now.”

I’m crying and I’m laughing and I’m sad that it’s over. The Middle Place is everything I anticipated and more. Mostly, it’s unexpectedly light – easy and fun to read, like talking to your dearest friend about her family that you grew up with too. I told a friend I was reading a book about generations and about cancer, heard back “wow that’s upbeat,” and realized I need a better way to describe this incredible book.
I don’t trust myself to figure that out right now, so I’ll just take refuge in some of Kelly’s words.
I’m sure her words will sell her book better than I ever could!

“This was one of the man things I had learned since crossing over into the middle place – that sliver of time when childhood and parenthood overlap … It’s a giant Venn diagram where you are the only member of both sets.”

“By the time I was old enough to bother noticing, my mom and dad had settled into a marriage that was high functioning but not especially romantic. It had all the characteristics of a healthy, established corporation. My mother held the power positions: finance and operations. Her real covered allowances, dress code, and chores. My dad took care of sales, like convincing us that snurfing (the precursor to snowboarding) down the eight-foot drop into the backyard was as good – better! – than a weekend in Vermont. He also defined our corporate culture. Corrigans, my dad conveyed, were scrappy corner-cutters who could always find a way into any place. They knew how to shake hands and make eye contact and tell a joke. They had reason to be proud. Under his leadership, employee satisfaction was high.”

“It’s good, like a miracle is good, to know that there’s somebody who will follow you down whatever path you choose.”

“I get another email from a particularly grown up friend of mine, Jen Komosa. She just says, ‘You are stronger than you think. You are strong enough.'”

“Someday, some later day, I’ll find out what it is to be an adult – to bury someone essential, someone you don’t think you can live without, someone attached in so many places you almost afll in after them.” 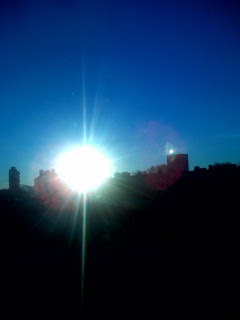 “The idea that some lives matter less than others is the root of all that’s wrong with the world.”
A closing quote in Mountains Beyond Mountains, which I finished this morning. The sentiment encapsulates Paul Farmer’s guiding philosophy (in my view). Tracy Kidder does a marvelous job portraying Farmer as a real man, full of contradictions and complexities. It would be easy to deify him, but Kidder resists that. Nevertheless, the book is inspiring and worth the read. I also love the Haitian adage from which the title is taken:
Beyond mountains there are mountains.