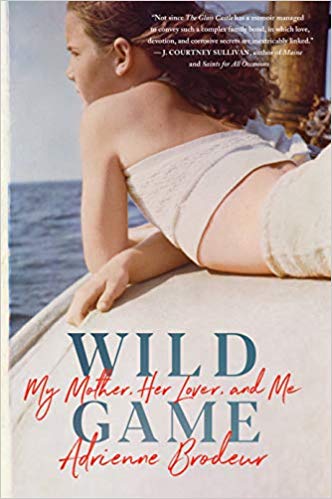 “For the drama to deepen we must see the loneliness of the monster and the cunning of the innocent.” – Vivian Gornick

When I saw Adrienne Brodeur read from and speak about Wild Game: My Mother, Her Lover, and Me

last week, she quoted this and the whole audience gasped.  This is what Wild Game does so beautifully: evokes the deep humanity of its flawed and beguiling central character, Malabar (whose name is aptly exotic) and the profound neediness of its protagonist, Adrienne herself, Malabar’s daughter.

Brodeur’s story begins when her mother, age 48, wakes her (age 14) up in the middle of the night to tell her that her father’s best friend, Ben, had kissed her.  Beginning that night, Brodeur is woven inescapably into the fabric of her mother and Ben’s affair.  For years it goes on, and Brodeur is her mother’s “confidant and accomplice,” not really thinking that there’s anything wrong with her role in this extramarital affair until during a gap year in Hawaii her boyfriend reacts badly to her telling him the story.  When her boyfriend asks “what kind of person would do that to her daughter?” Brodeur is confused.  Her reaction, that “Adam is getting this all wrong,” reveals how one-sided her impression of her own situation is.

We follow Brodeur through college and through her falling in love and marrying an interesting person.  I won’t reveal more here but her choice is at once startling and not at all a surprise.  We see Brodeur’s growing into adulthod, having her first baby, and dissolving into a tearful panic attack when for the first time her mother meets her newborn daughter.  In the back quarter of the book some of the story’s ends draw together, and we understand what happened to the key players on that night of the first kiss.  The kiss that, as Brodeur says, “marked the beginning of the rest of my life.”  Without giving away the facts of the story – and this is a memoir that reads, as Richard Russo says, “like a thriller,” it is true that Brodeur’s narrative closes with her reaching individuation from Malabar at last.  With space and years she has the perspective to look back on her mother’s behavior, which truncated her childhood and profoundly complicated their bond.

Mothers and daughters need to separate, a process that usually occurs during adolescence.  This can be painful and difficult, but it is necessary for two fully developed adult people to form where once an adult and an absolutely reliant baby were.  This individuation is complicated – and compromised – by Malabar’s choice to not only confide in Brodeur but to ask for her help in hiding her affair.  And when the necessary separation between mother and daughter does not happen, like plants that are deprived of light, growth can be stunted.  To continue with the tree analogy, it is that stunting, that gnarling, which Brodeur examines in Wild Game, and, from which she eventually breaks free.

Wild Game is a moving tale for anyone interested in the mother-daughter relationship or, further, anyone with curiosity about families in general.  It’s also beautifully written.  Both Cape Cod herself and Malabar’s gorgeous cooking are characters in their own right.  Brodeur powerfully evokes the dunes and tides of Cape Cod, a geography that’s very familiar to me, and she writes about Malabar in the kitchen in a particularly compelling way.  From the first scene, where Ben walks in holding a brown paper bag of fresh, dead squab for Malabar to cook, damp at the edges with blood, we return over and over again to Malabar at the stove.  She is a sorceress in the kitchen, whipping up gourmet meals with ease and grace and making even the reader salivate with hunger.

This is a stunning book, engrossing, thought-provoking, and hard to put down.  I have bought copies for friends and am recommending it to everyone I talk to.  I couldn’t recommend Wild Game: My Mother, Her Lover, and Me