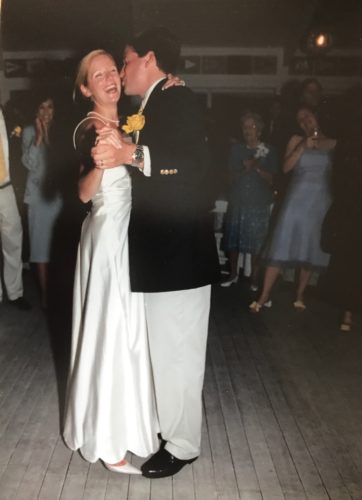 September 9, 2000
Not the greatest photo of us, but I still love it because it’s pretty clear we’re having a good time

Seventeen years ago September 9th, in a thunderstorm, Matt and I got married.  We didn’t know what lay ahead, and I think it’s safe to say the years between then and now have been both exactly as we planned and nothing like we expected.

What is on my mind lately is how full circle we’ve come from that day.  It was the two of us then, and these days I can see clear to when it will be the two of us again.  That truth is filled with loss and sorrow, but also with pride and celebration.  From the moment I became a mother I knew my job was to let her (and then, 2.25 years later, also him) go.  That’s been crystal clear to me from day one.  That I didn’t know how hard it would feel is a topic for another post.

In his sermon at our wedding, the minister who married us spoke about Kilimanjaro, which we had recently climbed.  I’ll never forget how he closed his remarks, speaking of marriage: “Kilimanjaro is nothing compared to this.”  And he was right, and I’ve been learning that lesson every year that we have been married.  As I’ve written before, the views are as spectacular, too.  The climb of married life, like that of Kilimanjaro, has been unexpected, sometimes surprising, and once in a while I have had a hard time drawing a deep breath.  But like Kilimanjaro, the journey of marriage is head-spinningly glorious and unforgettable.  I have never wanted to turn back.  Matt was there with me as we neared the summit of Kilimanjaro in the darkness, and he witnessed my determination that day.  I feel the same way now: keep moving forward. It’s worth it.

During a few days in August when neither child was home, Matt and I looked at each other and saw both the young people we were in the photo above and who we’ll be in a few years when we’re alone again.  It was disorienting, I’ll be honest.  But I just have to remember that he’s my wingman and has been for many years: on the mountain, on the dance floor, in the delivery room, and in the years ahead.

They are not long, the days of young children at home.  They fly, in a blur of crayons and crying and then, later, hockey games and baseball games and track meets and Snapchat.  I think the key, when choosing a spouse, is taking a gamble that the person you stand next to in a white dress (or another outfit, depending on your preference) is one you’ll want to be standing next to many years later.  In many cases, that’s after the intensity of the family-focused years has ebbed.

2017 has held great new beginnings for all of us and a huge amount of tumult.  A lot of change.  I described the last month or two as “whitewater” to someone recently, and that’s what it has felt like. May there be both smoother sailing and gentler voices in this next year.

Happy 17 years, Matt.  This message, like life lately, is a little disjointed, but it comes from a place of deep feeling and tremendous commitment.  I love you.