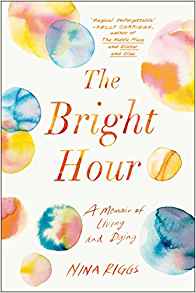 , Nina Riggs’ posthumously-published “memoir of living and dying” is about every mother’s nightmare and what I view as this life’s most essential, un-answerable question: how do I leave my children?  It’s also about saying goodbye to her mother after a long illness, and of doing that while facing cancer herself.

Of course the material is difficult, but The Bright Hour

is not a gloomy book. I promise. It’s full of vibrant life and vivid details, written in clear, often-humorous prose, and I did not want it to end.  I did not want Nina to die, of course, but I also did not want to stop hearing a voice that had become as familiar and beloved as that of a friend.

This book is beautiful.  Walk, don’t run to order and read it.  As Will Schwalbe (another beloved author, find his lovely Books for Living

here) says in his blurb, The Bright Hour

belongs alongside Being Mortal

and When Breath Becomes Air

as a book about dying that “has powerful lessons for everyone about how to live.”

begins with a scene of Nina running behind her son the first time he rides a bike, tripping, and discovering that her breast cancer (previously just “one small spot,”) has spread to her spine.  It’s a chilling, gorgeous scene that holds within in the rest of the book: living and dying, beginnings and endings, children spreading their wings as our own flight comes to an end.

The book is peopled with unforgettable characters, some of whom are also fighting cancer.  Most of all, there is Nina’s brave, book-loving mother, whose own death from cancer comes in the middle of the Bright Hour, and which made me cry (the scenes of her last days in the house) and laugh (the scene with Nina’s father considering an old Tupperware pitcher, in which they made lemonade, as a container for her ashes). Of her mother, Nina says, “her life’s work has been looking straight at things,” which seems like it applies to our narrator, too.  During Nina’s mother’s service, during an uncomfortable moment of silence, her brother observes, “It’s about honoring the unknowing and the awkwardness and the mystery of dying … it’s unsettling – and that’s okay.”  And the reader gasps, because that’s what The Bright Hour

Nina is also, unsurprisingly, surrounded by wonderful friends.  Her text exchanges with Ginny, who is also fighting cancer, made me laugh. There is Tita, her best local friend, whose support and loyalty steady the book.  And of course there are her two crackling, fully-human boys, Benny and Freddy, and her steadfast husband, John.  I was particularly moved by the way she wrote about John, for example about their private joke that “at least I’m here with you,” a line from a baby’s LLama Llama book.  The intimate details of their life together made me ache, and reminded me of some of the private little things Matt and I share (the way we pronounced A-aron, or how we’ll once in a while say, “Brownie, you’re doing a heck of a job.”  With these vivid, small details Nina evokes life itself.

is not sardonic in the way of some books that are are about seeing the hilarious in bleak times.  No.  Instead, it is unabashedly in love with life, and Nina herself is extraordinarily clear-eyed in her ability to see the glory, beauty, and humor in her own life. Towards the end, she muses “I never stop being amazed by how simultaneously cruel and beautiful this world can be,” and I nodded through tears, because that is as clear as a neon sign to the reader.  The loss of Nina to cancer at 39 was a huge loss, for her family, her friends, for the readers who will flock to her words, for the world at large.  I urge you to read this gorgeous book, and plead that you not be afraid of it. Nine is a once in a lifetime person, and though I regret not knowing her while she lived, I’m hugely grateful that I read her words, that she put them down, and that I experienced, however briefly, the world through her eyes.

8 thoughts on “The Bright Hour”