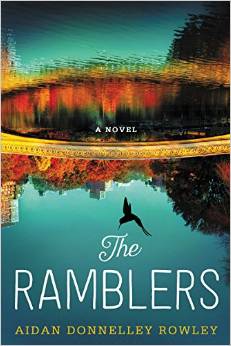 , and I’m even more delighted to jump on the table in support of this book.

I read The Ramblers

in one delicious gulp last fall and I haven’t been able to stop thinking about (or texting Aidan about) the characters since.  The three protagonists, Clio an ornithologist who carries deep scars from growing up with a mentally ill mother, her best friend from Yale, Smith, who comes from one of New York’s “perfect” and hugely wealthy families and is recovering from the sudden end of the engagement that she thought would begin her own happily ever after, and Tate, a college classmates of theirs who has returned to New York in the wake of his marriage ending and his company’s highly lucrative sale.

Clio, Smith, and Tate tell their stories in interwoven chapters and their lives are both absolutely their own and inextricably connected.  Each chapter opens with an epigraph, a practice I love in books.  The first voice we hear is Clio’s, and the use of Charles Darwin’s words, “if we expect to suffer, we are anxious,” sets the stage for a book that is by turns about anxiety and fear, discomfort and adaptation, where we come from and where we’re going.

We learn early on that Clio’s mother was bipolar.  This fact is at the complicated knot at the center of Clio’s life, and her relationships with her boyfriend and her father both exist in its shadow.  Her work studying the adaptation of birds, her discomfort really letting her older boyfriend know her, and her passionate attachment to the Ramble, a section of Central Park from which the book takes its name, are all important threads that run throughthe book.

Smith, so structured and fond of order that she runs her own company which helps people declutter and organize their lives, has recently faced the most disorienting disruption she could have imagined. Her fiance, with whom she had planned and envisioned her future, walked away suddenly.  In the wake of this loss Smith is working to determine to find her footing in a life that looks nothing like she imagined.

Tate, a photographer with a soulful love of poetry, recently sold an app that he founded with a friend for $40 million dollars.  His wife also decided that their marriage was over.  He has returned to New York after this abrupt turn of events and is, in many ways like Smith, trying to determine what he truly wants to do now.

Clio is the central character of The Ramblers.  All three central protagonists are compelling, but for me it was Clio’s themes that formed the book’s animating core.  Her mother haunts the narrative, and we hear her voice in the form of a letter towards the end.  In their own ways, though, all three characters struggle to define themselves apart from strong family legacies.  Clio’s mother’s bipolar is the clearest example of this, but both Smith and Tate also wrestle with where they’re from.

All three of the main characters are, we see clearly, ramblers.  Towards the end of the book, in a Clio’s notes on a walk in the Ramble, she muses “Maybe that is the point after all?  To be lost?”  Clio, Smith, and Tate are all in their thirties, true adults, and all three reckon with this reality.  It’s time to make personal and professional decisions, and the questions that Clio, Smith, and Tate face beat through the book like a pulse.

I can’t recommend The Ramblers more highly: the book is gorgeously written, deeply moving, and stays with you long after you finish it.

5 thoughts on “The Ramblers”