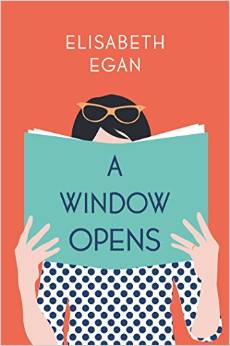 is both entertaining and poignant, a page-turning read that managed to move me to tears even as it made me laugh out loud. I’ve rarely read a book that felt so familiar, and I realized when I closed it that’s because Elisabeth managed to touch on so many topics close to my heart in this particular moment of life: aging parents, school-age children, marriage, work-home tensions, and the challenging ways that new and “revolutionary” retail intersect with those who love old-school, and traditional books.

follows a year in the life of Alice Pearse, a 38 year old mother of 3 who goes back to work full-time when her husband’s law career hits unexpected skids. She faces the return of her father’s throat cancer and juggles her new, demanding professional job with the needs of her three school-age children. Finally, Egan’s book makes some salient and provocative points about businesses that purport to change the world but, perhaps, are not quite all they seem on the surface.

Alice is a tremendously likeable protagonist, and I was immediately swept into her world. So much of what she’s dealing with is intensely known to me, and more than once I gasped out loud. For instance, Alice quotes my favorite Thornton Wilder quote (“do any human beings realize life while they live it – every, every minute?”), mentions that parenting small children can be like dealing with terrorists (Matt and I used to laugh that putting Grace to bed was like “negotiating with the Khmer Rouge at gunpoint”), and refuses to budge on the issue of cutting crusts of sandwiches. She won’t do it, and neither will I.

Alice is also a lifetime reader, a passionate lover of what her new employer calls “carbon-based books.” Her best friend owns an independent bookstore in their New Jersey town and Egan beautifully traces the ways in which their relationship changes as Alice joins Scroll, whose blazing, ambitious agenda is to revolutionize how people read.

There are many storylines woven together in A Window Opens

, and each of them touched me, both at the level of a nerve and at that of the heart. While the book is clearly Alice’s, there is a rich and well-developed population of supporting characters around her.

Egan beautifully evokes the intimacy that exists between Alice and her long-time babysitter, Jessie. The scene of Jessie leaving on her last day made me cry, because it reminded me of our own long-time babysitter’s final departure. I was devastated, so much so that I had to take Grace and Whit on a walk around the neighborhood and trail them, hoping my sunglasses would at least partially mask my torrential tears. The genuine bond that develops between a mother (and, probably, a father; I just don’t know) and her trusted babysitter is a deep well of trust and love.

Alice’s parents, who live in a neighboring town, are also major characters in the book. Her father uses a device they’ve nicknamed Buzz Lightyear to speak after throat cancer caused the removal of his larynx years ago. He communicates often with Alice through text and email, and these appear in the book as well. During A Window Opens

Alice’s father’s cancer returns, and his ensuing illness sends substantial shockwaves through the story. Towards the end of the book, as Alice finds herself in a difficult situation at work, her father’s cancer and the metaphor of voice echo in her mind. You have a voice. Use it, she tells herself, and I got goosebumps. Legacy and family and inheritance all combined in that single moment, and Alice, emboldened by the thought of her father, makes an important choice.

Most of all, though,  A Window Opens

is a love letter to motherhood. Over and over again, I blinked back tears as I read details of Alice’s life with her three children, Margot (11), Oliver (8), and Georgie (5). Towards the end of the book, an architect who is drawing up plans for a kitchen renovation tells Alice that hers is “one of the ten happiest houses I’ve worked in.” This is abundantly clear to me, too, as I read the book, even though that happiness is shot through with challenge and struggle. There’s nothing simple or smooth about the year of Alice’s life that we witness, but her abiding love for her family shines through.
A Window Opens

is replete with telling, vivid details. We see Margot catching her mother’s eye at an event at school, her glance telling her mother everything she needs to know about a certain tricky friendship. We see Oliver walking down to meet his mother at the train station every night when she comes home, sometimes in his Halloween costume and sometimes coming a little too close to a speeding car. We see Georgie’s face light up at the school nurse’s office when Alice shows up, having taken a taxi from Manhattan because nobody else was available.

Alice Pearse is a true heroine as far as I’m concerned. Her story is wildly entertaining – I could not put A Window Opens

down and read it in a couple of days – and deeply affecting. Alice’s love for her husband, her children, and her parents is the beating heart of the book. Her narrative reminds us that sometimes all we really need is right in front of us, and makes palpable how almost painfully precious this ordinary life can be. After a long and difficult year full of questions and challenges, on the last page of the book Alice finds herself on a roof deck on the Jersey Shore at sunset. She looks around at her family, all of whom are still reeling from big changes, and observes to herself, “I was in the exact right place and I knew it.”

is about the reckoning that results in this knowledge.  It’s about figuring out who we love and who we most essentially are.  I adored Elisabeth Egan’s book and know you will do.  It comes out in August but you can preorder it now!

Disclosure: these are affiliate links.

5 thoughts on “A Window Opens”