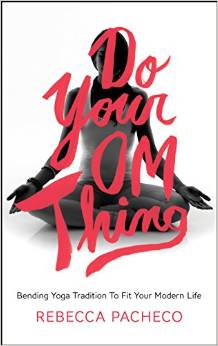 I’ve been practicing yoga, with a frequency that has varied between daily and weekly, for over 15 years.  I’ve read parts of the Bhagavad Gita, I used to know the primary series by heart, and I’ve been on a week-long retreat that featured long periods of silence, a lot of vegetables, and 45 minutes of pigeon pose at a time.  All of this is to say that I’m somewhat familiar with yoga.  I’m not an expert, by a long shot.  But I’ve read a lot and practiced a lot and even written about it from time to time here.

is my favorite book about yoga that I have ever read.

Rebecca makes yoga tradition clear and compelling and unpacks things like the chakras and the koshas that I’d previously found confusing enough to be entirely off-putting.  She asserts something that we all know to be true but that I posit most of us have lost touch with: that yoga is about far, far more than the asanas.  But taking yoga beyond the physical poses is frankly hard, because the literature about yoga’s traditions and philosophy is opaque and difficult and because, especially in these days, we are all more distracted than ever.  In this book, Rebecca changes all of that.  These two quotes summarize what Do Your Om Thing

Yoga doesn’t manufacture a feeling of completeness; it offers tools for becoming present enough to realize it’s been there all along.

Internal quiet and connection to our deepest self form the essence of yoga.  It’s not fancy. It doesn’t balance on one arm.  But it’s the plain truth of yoga’s purpose, and it will change your life.

Do Your Om Thing

is structured in four parts.  Part I, Yoga: Ancient and Modern, briefly covers Rebecca’s own story and path to yoga and then describes the famous “eight limbs” of yoga.  Over and over again, Rebecca shows how the sometimes dusty-sounding limbs of yoga have relevance to today’s life, and reminds us that being a yogi in 2015 is about understanding yogic tradition in order to apply it to modern life.  She quotes Zen master Sheng Yen, reminding us that “practice should not be separated from living and living at all times should be one’s practice.” In Do Your Om Thing

she emphasizes that while yoga may be a series of sexy poses that will give you sculpted arms, it is far, far more than that.

Yoga is a way of being in the world.

Rebecca discusses each “limb” of yoga briefly and offers concrete guidelines for readers wanting to incorporate them into their regular lives.  This is one of things I love most about Do Your Om Thing

: the way Rebecca makes something as diffuse and difficult to grasp as yoga philosophy utterly understandable, real, and actionable.

Part II, The Body, talks about the chakras, the seven energy points that reside along our spines, and the koshas, the body’s five layers.  Once again, Rebecca shares specific intentions, mantras, and asanas (with beautiful photographs) to go with each chakra.  As in the rest of the book, Rebecca’s clear, lucid writing renders understandable (and fascinating) something that I’d previously found challenging.

Part III, The Mind, discusses meditation.  Rebecca reminds us that “the quality and direction of your attention is the greatest determinant of the quality of your life.”  This section, and the brief discussion of meditation in part I, showed me that much of what preoccupies me in my life is in fact quite yogic in nature.  When I read this, I shivered:

It will always be tempting to fidget, flee, or Facebook update instead of inhabiting the present moment, which can be challenging and uncomfortable, even tragic and terrifying, at times, but it’s this lack of consciousness that leaves us feeling like we need yoga in the first place.  The feeling of missing our own lives, as they are happening.

Oh, yes.  This feeling, of missing out on my own experience even as I live it is one I’ve long felt and often written about.  Rebecca shares some helpful tools for beginning meditators and describes several meditation styles.

Part IV, The Spirit, which makes suggestions for “spiritual sustenance,” is my favorite part of the book.  Rebecca tells personal stories, including about her grandmother, to whom the book is dedicated and who believed that “life itself is a spiritual practice.”  Parts of this section of Do Your Om Thing

brought tears to my eyes and goosebumps to my skin.

Thomas Merton once wrote, “Life is this simple: we are living in a world that is absolutely transparent, and God is shining through it all the time.”  This doesn’t mean that life won’t be difficult of painful, characterized by change and loss; it means that a higher power, the wellspring for your spiritual life, whether you realize it or not, is holding a candlelight vigil or perhaps a roaring bonfire for you all hours of the day and night. It doesn’t sleep. It doesn’t leave.

Is the loneliness of which I’ve written, whose shadow limns my everyday experience, an ache for this higher power, a longing to trust in that candlelight or bonfire?  I suspect so.  Rebecca shares nine “suggestions for spiritual sustenance,” each of which I found profoundly moving.  She incorporates quotations from literature, stories and thoughts from others living an engaged life, and questions from ancient texts (such as the Bhagavad Gita).

The last section of the book, titled love, opens with one of my all-time favorite quotes: “In the end only three things matter: how well we have lived, how well we have loved, and how well we have learned to let go” (Jack Kornfield).  Rebecca closes with reflections on love, for the self, for other, for the world at large.  She reminds us that while yoga doesn’t have to be our sole workout, it is our soul workout.  “Find a way to make life the practice – one of humility, gratitude, and awareness,” Rebecca urges us.  And with this beautiful, thoughtful, wise book, Rebecca has given us an incredibly powerful tool to do just that.

Do Your Om Thing

Disclosure: these are affiliate links