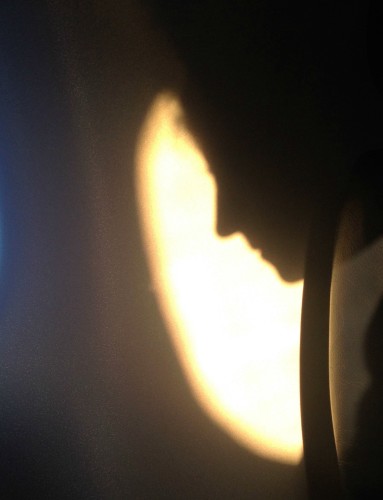 On Wednesday I had the privilege of watching the almost-solstice sunset from the air.  This was my profile in the shadow of that sunset.

This is the holiest day of the year for me.  For the last week or two I’ve felt it coming, felt the awareness of the fulcrum we’re perched on more keenly than I can articulate.

One morning this past week, up early, I saw the year’s last full moon hanging low in the sky, heavy, striated with faint yellow, looking so close and so far away at the same time.  I watched the swollen moon as it passed towards the horizon, from the world we can see to that we can’t, and felt a tightness in my chest that reminded me: yes, this is solstice season.

Just this week, talking about the solstice, I told Grace and Whit about an experience I had many years ago on December 21.  It was dusk, and I was watching the sun go down.  I observed as the light at the horizon narrowed from a wide, almost spiky band of luminous pink to a narrower line, burning a fierce orange color.  All of a sudden, I was overcome with a sensation I hadn’t felt before and haven’t since.  I could sense my grandmothers, Susie, and Mr. Valhouli standing just over the edge of the horizon.  I couldn’t see them, of course, but I was aware of them, hands over their heads, waiting to receive the sun as it slipped from the bowl of our sky into that of theirs.

There’s something pagan and primitive about this day, a bone-deep awareness that the world turns in an enormous galaxy.  More than any other time of year, I’m reminded of our tiny place in the grand pageant of this universe.  Something ancient and essential beats in my body like a heartbeat on the solstice, an ancient message about the inextricability of and interplay between light and dark.

It is so dark right now, but there is also so much light.  This day reminds me of that.