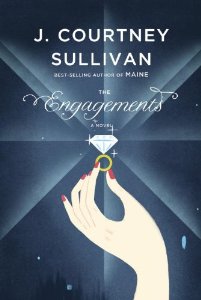 I couldn’t wait to read Courtney Sullivan’s new novel, The Engagements, which comes out June 12th.  I was fortunate enough to read it recently (for disclosure, we share an agent, and I was given an advance copy.  The views expressed here are absolutely my own).

The Engagements opens in 1947, late at night, as Frances, an advertising copywriter, works on the DeBeers account.  A master procrastinator, she’s left coming up with a new, catchy slogan until the last minute.  Right before she goes to sleep, she comes up with “a diamond is forever.”

The rest of The Engagements demonstrates the veracity of this single line, the importance of which belies the casual way in which it was born.  The book traces five particular couples, in five distinctive voices: we have Frances’ stories and four very different marriages. The stories, each distinctive and unforgettable, wind together into a hopeful song of life, love, and family.  About three quarters of the way through the book a character observes that “in life you could only connect the pieces after they’d been put in motion,” which serves to underline the ways in which the connections between The Engagements‘ various pieces and narrators reveal themselves slowly.

In 1972 we meet Evelyn and Gerald, who are coping with their son’s desertion of his wife and two small children in the name of a new love.  They represent long marriage, the relationship that unfolds after many solid, seemingly placid years together.  The complicated, scandal-tinged beginnings of Evelyn and Gerald’s union are only revealed later in the book.

In 1987 we are introduced to James and Sheila, who live in a Boston suburb with their two sons.  James’ work as an ambulance medic, which often takes him into Cambridge and Harvard Square, offered me some laugh-out-loud moments of recognition of my neighborhood.  As their story unfolds, we see that James and Sheila’s lives of quiet desperation are shot through with a strand of real and enduring love.

Delphine’s story opens in 2003, as she is methodically and comprehensively destroying her fiance’s apartment.  In flashbacks we trace the arc of this engagement, and its genesis in the ashes of her first marriage.  Dephine’s is the most obviously sorrowful story in the book, but even so it comes to a redemptive conclusion.

Kate and Dan, who we encounter in 2012, are The Engagements‘ modern couple: they are unmarried, and their story revolves around the gay marriage of Kate’s cousin Jeffrey.  In their scenes, however, as untethered as they are to the traditional world in which the book begins, we witness deep commitment and love, whether or not marked by the presence of diamonds.

Individually, each marriage is multi-faceted, honest, full of both flaws and beauty –  not unlike a diamond.  Collectively, they show us that even when things go badly, even in times of heartbreak and sorrow, people persevere, family bonds endure, and love lasts despite all odds. The diamonds are both figuratively and, we understand at the end, literally forever.

And then there is Frances, whose story opens The Engagements.  She hovers over the book, the single person who created the world’s powerful association between diamonds and eternal love.  She recognizes the “irony of her situation … a bachelor girl whose greatest talent so far was for convincing couples to get engaged.”

The Engagements is a rollicking, entertaining read and a thought-provoking one too.  Several of the characters’ voices have stayed in my head, and even days after putting it down I am left with a sturdy, hopeful sense of the fundamental goodwill of people and the abiding power of love.  I highly, highly recommend Courtney’s book and am certain it will be one of this summer’s big hits.  Order it now to be sure your copy arrives in early June!

7 thoughts on “The Engagements”