I still don’t quite have words to fully describe our experience in Jerusalem.  I recommend Hilary’s reflections, and in lieu of any writing, offer some photographs. 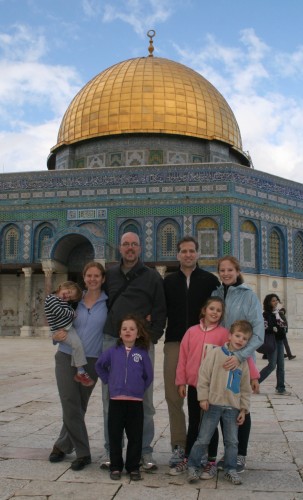 My sister Hilary and I and our families by the Dome of the Rock.  We went to the Temple Mount twice, and both times I was moved by a sense of calm and peace in the expansive plaza that surrounds the beautiful, exquisitely-detailed building.  Looking at this picture I’m struck, also, by the evidence that Hilary and I are, in fact, grown-ups, and that we have created these real live families.  Which, somehow, continues to shock me. 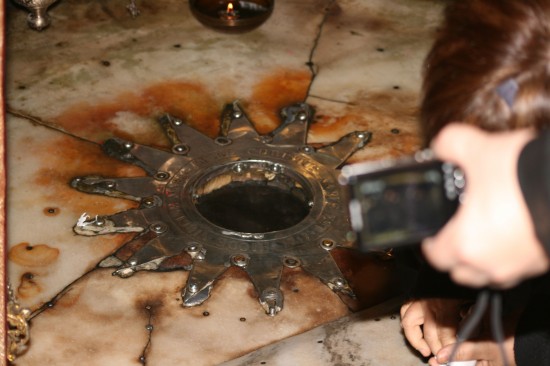 Jesus Christ’s birthplace in the basement of the Church of the Nativity.  Like so many of the high, holy spots in Jerusalem (and in this case, Bethlehem) I was struck by what seemed like simultaneous ornateness and randomness.  We knelt in front of this silver star and touched it, in a small, low-ceilinged basement lit by hundreds of gas lanterns. 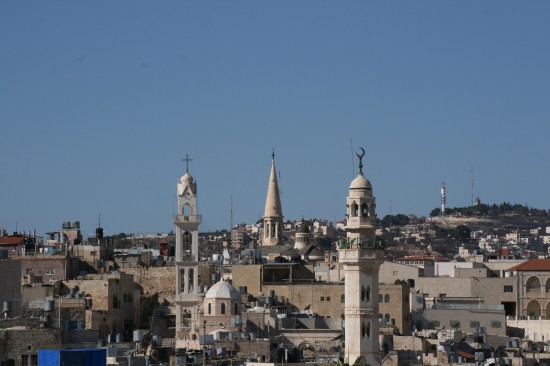 Bethlehem rooftops, with a mosque and two churches cohabiting.  And the stunning blue sky that graced our whole visit except for Christmas Day, when it poured all day long (and created an entirely different, but also real, beauty). 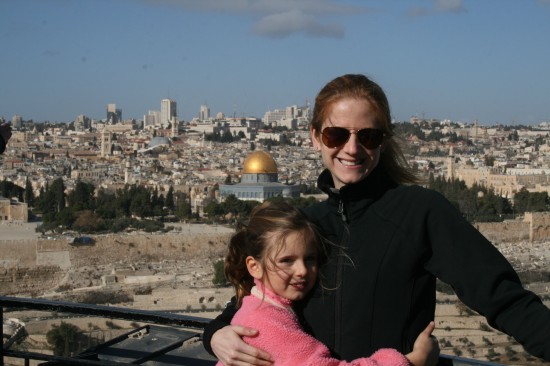 Grace and I on the Mount of Olives on Christmas Eve. 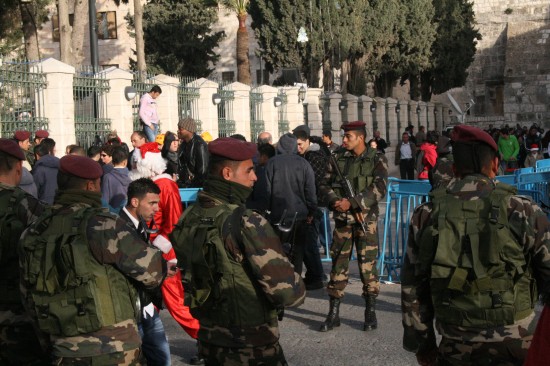 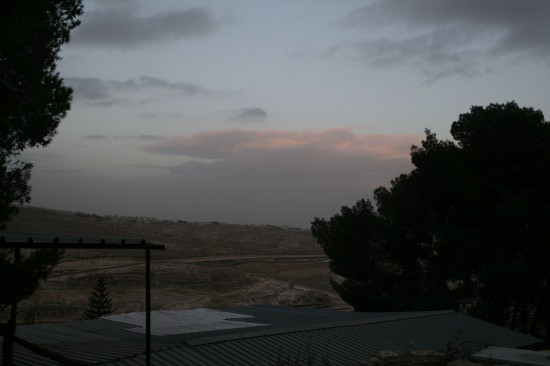 Sunset over Shepherd’s Field, where the angels first appeared to tell of Jesus’s birth.  We sat in an ancient church, open to the air, and sang Christmas carols as the sun set. 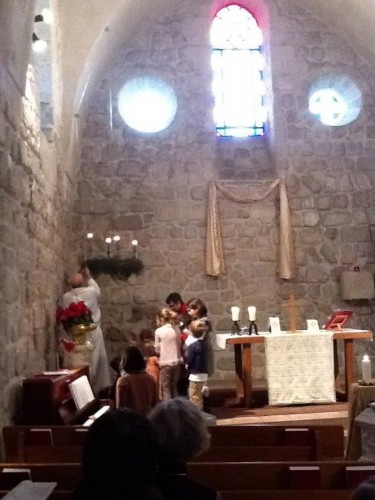 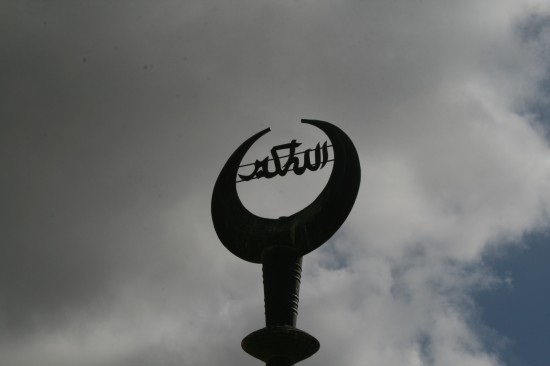 Mark of Islam against the same glorious sky.  So many of my pictures are of crescent moons and crosses and flags against the blue Jerusalem sky. 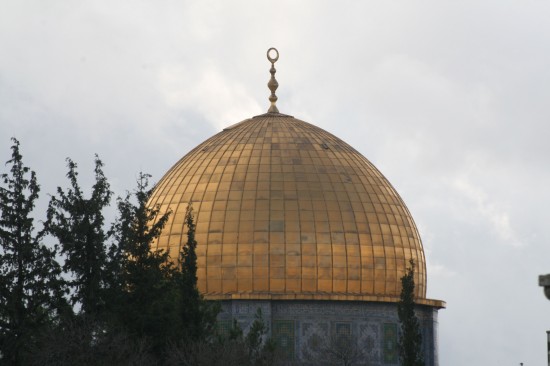 Again, the Dome of the Rock. 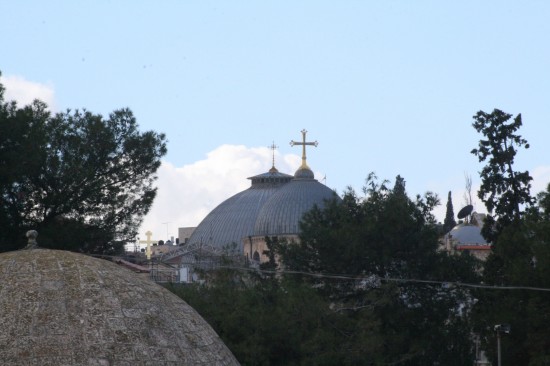 The crosses of the Church of the Holy Sepulchre.  Visible in the same frame as the gold dome, if I had had a wider lens. 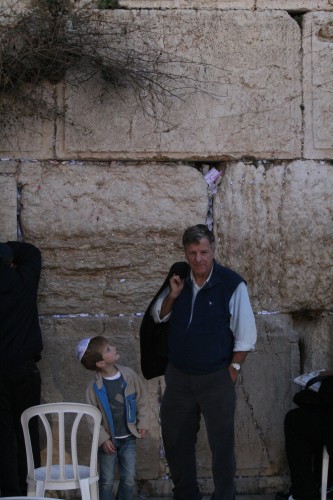 My son looking up to my father – in so many ways, literal and figurative – at the Western wall. 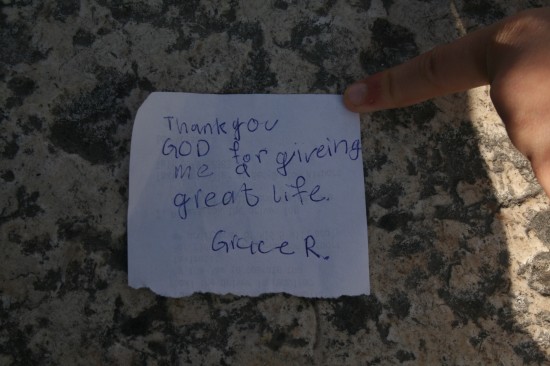 The prayer that Grace put into the Western Wall.  I left one too.  Praying is saying thank you. 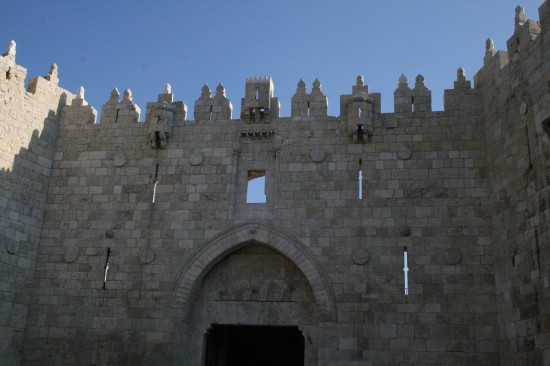 Damascus Gate.  One morning we circled the ramparts around the old city, and explored behind this ornate and beautiful facade. 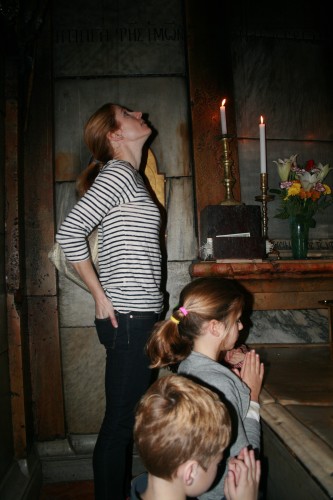 Inside Jesus’s tomb, from which he ascended into heaven.  I love this picture because you can see the children are praying and I am looking up.  That’s what I do, always, when prayer is called for.  I look up: to the sky, to the stained-glass windows above the altar, just up, up, up.  It’s my automatic instinct.

And so, enriched by a week in December, looking up, always, I go forward into 2012.  Thank you, HTHM.