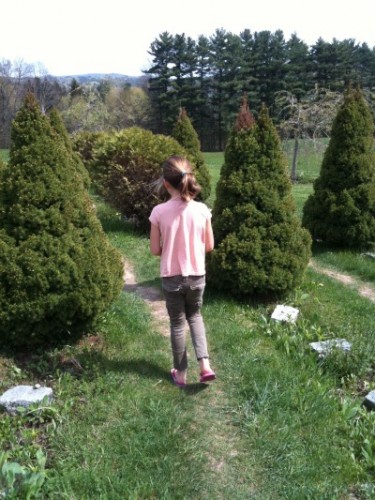 I am reading Barbara Brown Taylor’s beautiful An Altar in the World right now and loving it.  Several different and disparate people recommended it to me and they were all right.  There are many passages that resonate – most of all the section called “reverence,” which is the best way I know how to describe my instinctive posture towards the world.

In the book’s section on groundedness Brown Taylor writes of the ancient spiritual practice of labyrinth walking and I thought instantly of last spring, when Grace and I went to Kripalu.  Together we walked the labyrinth there, and I was startled by how utterly she seemed to sense the palpable peace and – well, reverence – in the air.  I followed Grace in silence, watching her narrow shoulders, her bobbing ponytail, the little freckle at the base of her neck that I remember noticing when she was only months old.

Just like life, Brown Taylor says, the labyrinth had “switchbacks and detours,” and “the path goes nowhere.”  In fact, “the journey is the point.  The walking is the thing.”  I’ve walked the Kripalu labyrinth twice, once alone, and once with my daughter, and both times I found myself doubting, at a certain point in my passage, that the winding back-and-forth path will ever get me to the center.  The center that I can see so clearly and yet, rule-abider that I am, I refuse to simply walk into. Of course, with a little trust and some forbearance, the path eventually got me there both times.

More importantly, though, there’s no actually no eureka at the center.  There’s a pole which says let peace prevail on earth (I was delighted when I noticed that an identical pole stands in the playground of my children’s school), and some small piles of stones, which remind me of the cairns at Walden.  I stood in the quiet center, my entire being prickling with awareness, and then, after long moments of listening to my own breathing (and Grace’s), set back out again on the winding path.  There’s nothing, really, at the center.

The journey is the point.

I am deep in my own labyrinth right now.  Some unexpected switchbacks and detours are causing my faith in the security of the path waver.   That it isn’t the destination I am doubting is evidence of enormous internal growth for me.  I don’t much care about the destination, anymore – after years and years and years, I’ve honestly and truly let go of that.  But I’m feeling the ground under my feet shaking some, and I don’t like wobbling.  So I’m trying to close my eyes and revisit the labyrinth at Kripalu, hear my own breathing and Grace’s, and put one foot in front of the other.  To remember: the walking is the thing.

10 thoughts on “In the labyrinth”