Thanksgiving was full of experiences that carried the mantle of important, moments I could feel turning to memories even as I lived them.  Most of all there was our Friday evening celebration of my in-laws’ 45th wedding anniversary and the 9th anniversary of my father-in-law’s successful heart transplant.  My in-laws had their three sons and five of their six grandchildren together (the sixth, 8 months old, was not able to stay up so late!) for a lovely dinner.  My sister-in-law and I made a book of photographs of the last 9 years for our father-in-law, and the memories contained in its pages brought everyone in the room to tears.  Also of note: my turkey was damn good.  I think my cider-based brine (which I pretty much made up) was a hit.  I think I was proudest, though, that all of my dishes were done before dinner was served.  A big achievement for such an ardent believer in clean as you go as I.

It was two far less weighty moments, however, that stand out for me as the most crystalline.  They were moments with a surprising, surreptitious power, the kinds of mundane experiences that I have learned can turn into the most sustaining and vital memories.  I hope that Grace and Whit remember days like these with the same affection and gratitude that I do. 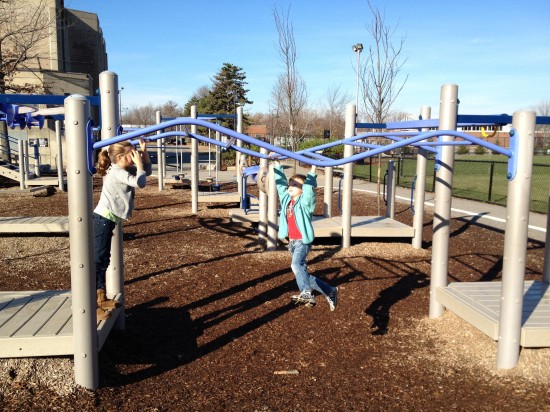 On Friday morning Matt had to work so Grace, Whit and I took our skates to be sharpened and then stopped by a playground on the way home.  I sat on one of the swings (swinging alone is one of my favorite things to do) while they played together for 15 minutes … 30 … 45.  I swear.  I watched in wonder as they cooperated, laughed, and made up an imaginary world where the ground was lava. 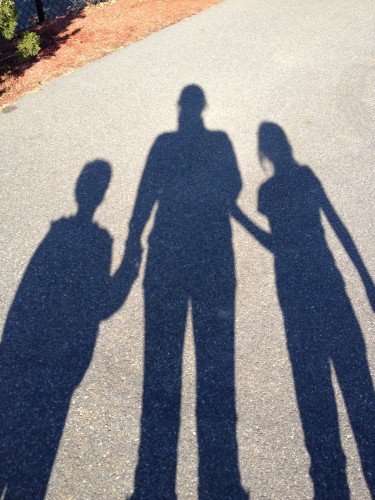 The sky was crystal clear, the branches were all bare, and we didn’t see another human being the whole time we were there.  It was so warm both kids shed their jackets.

The sun shone on that hour.  And in its light I saw something glinting.  My life. 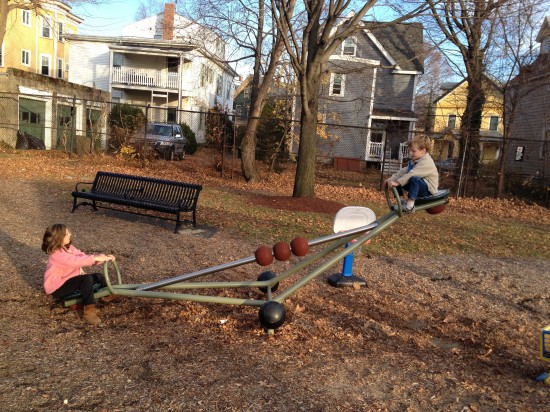 On Saturday afternoon Grace, Whit and I walked to a nearby movie theater to see The Muppets.   They are generally amenable to my walk-whenever-we-can policy, parroting now my points that it is better for both our health and for the environment.  On our way home we detoured past the house Hilary and I were born in.  I pointed out the windows to the living room, where I told Grace I remember walking in circles around the room reciting my times tables.  When I was in third grade.  With the homeroom teacher who is now her Math teacher.  And they are learning their times tables.  Sometimes it all swirls together so blindingly I have to blink and hold onto something so I don’t get dizzy.

The three of us played for a long time on the seesaw, which has three weighted balls that you can slide from side to side to even out the weight.  I wished my physicist father was with us to answer some of the questions I got. 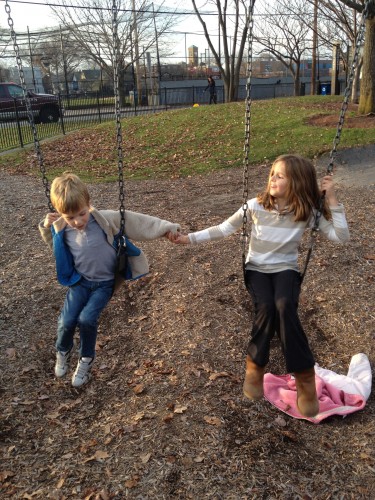 Then they hopped on the swings and went for a while, holding hands.  They made up songs and sang them at the top of their lungs.  I sat over to the side, watching them.  The light turned their faces golden as it sank towards the horizon, and then everything cooled and dimmed when it slipped below it.  I looked at my children, and I looked at the light of the hour.

I am as proud of my children for their imaginative play as I am for any of their more conventional accomplishments.  I feel intensely grateful that they are still overjoyed by a playground, that they can run and jump and swing and invent a world.  That they want to do this together adds immeasurably to my joy.  This pride is linked to my belief about the power of fairy tales, I’m sure of it.  I want my children always to experience wildness (a central reason I love the cemetery so much, another place we went this weekend).  I want them to rejoice in the freedom offered by unstructured situations.  I want them to enjoy moving their bodies, to prize the fresh air, and to laugh together.

And they did.  And I was grateful.  The holiday held a plethora of gorgeous moments, for sure, many of which I’ll never forget.   The two that I felt were the purest expression of thanksgiving, though, were these two hours at the playground.