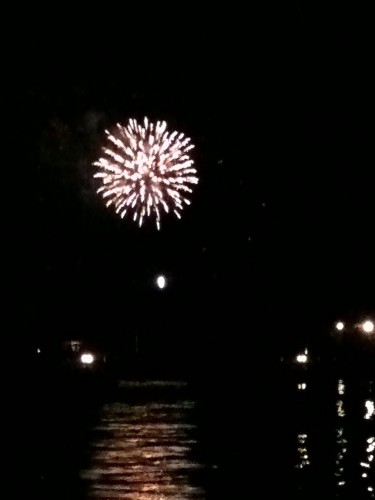 Last Friday night was the annual fireworks display in Marion.  For a number of reasons I was having one of those evenings where I felt like Grace and Whit were the only true, steady things in my life.  We walked down to the dock at the end of the street to watch the fireworks hand in hand.  Whit has this new thing he does when he’s walking and holding my hand, where he turns my wrist to his face and kisses it.  He kept doing that, so often that I felt my heart expanding in my chest, filling (some of) the space that had felt so echoingly, clangingly empty just moments ago.

We sat and watched the fireworks. The show ended and everyone around me stood up to go, but I sat and watched the wisps of smoke in the sky.  Where there had been flashes of brilliant light, now there were traces of faint grayness, fading gradually to black.  The space held the memory of what had been, but tenuously, and only if you paid attention.

Grace tapped my shoulder and looked down at me.  “Are we going to go?”  I stared up at her, at her angular face, so full of her galloping years, and I blinked.  She looked confused, wondering, no doubt, what I was doing.  Shaking my head, stunned at the traces of babyhood that were still, but barely, visible in her face, I got to my feet.

We walked slowly back to the house, Grace holding my hand.  Whit was walking with Matt, and they and my parents and other people moved near us but I felt like Grace and I were alone in the world.  She gripped my hand and I glanced over at her head, her braids messy from a day in and out of the water, and noticed that it is at my shoulder now.  “Will you always watch the fireworks with me, Mummy?”  She spoke quietly.

“Yes, Grace, of course.”  I dropped her hand to squeeze her shoulders against my chest, marveling at how solid she seems, when she used to be so birdlike.  “Until you don’t want me to, of course,”  I laughed.  “Like when you’re a teenager.”  I smiled at her but she was looking straight forward with a scowl on her face.

A beat passed and we walked in the full-blown summer evening, hydrangeas everywhere.  “I don’t want to be a teenager, Mummy,” she said firmly.  I looked over at her, surprised.

“Because I don’t.  It’s going too fast.”  She stopped walking and faced me.

What I said next surprised me.  “Grace, you know how right now you are so excited about summer, and then at the end of summer you are ready for it to be over, and to go back to school?”  She nodded.  “And remember how at the beginning of December Christmas is so exciting, and then by the time it’s New Year’s you just want to pack away all the decorations and start back to regular life?”  She nodded again, but clearly wondered where I was going.  “The point is,” I said, swallowing as I realized where I was going.  “Everything happens at just the right time.  I promise.”  My eyes welled with tears.  Do I even believe this?  I don’t know.

“No.”  She looked right at me, her own eyes glassy, wet.  “I don’t ever want to lose you.”  I wrapped my arms around her and she buried her face in my chest.  I could feel tears through my thin cotton t-shirt.

“You won’t ever lose me, Grace.  You won’t.”  I closed my eyes and saw the gray streak of where the fireworks had been against the night sky, heard the whisper of moments that had passed, said a silent thanks for the fact that I can see the vestiges of smoke that remain after the showy brightness of life’s fireworks.