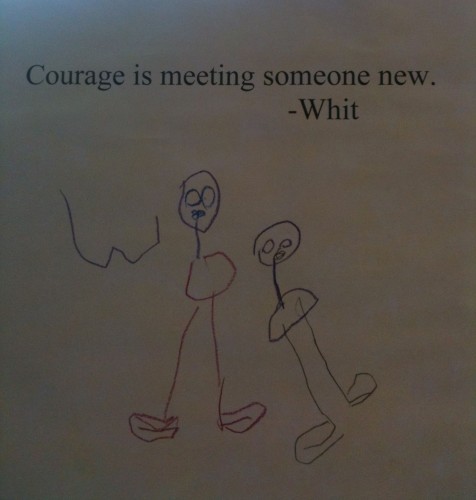 At least once a week Whit’s teacher finds me at school drop-off- or pick-up to relate the latest story of his hilarity. The one she told me last week was about courage. They had been talking about courage, and what it means, and as you can see above Whit decided that courage is making acquaintances. I am also, as a sideline, totally charmed by this art, complete with spidery “W” signature. I’m not altogether surprised that this was his definition of courage, because for all of his feisty humor and attitude, my son is actually quite shy with strangers and struggles mightily with the eye contact I really think he ought to be making with other people when they speak to him (GRRRR).

Anyway, later that day Whit and his teacher were on some errand in the school building, when they met another adult that Whit did not know. She prompted Whit to say hello and introduce himself, which he did. As they walked back to the classroom, Whit apparently tugged at his teacher’s arm and looked at up her with very serious eyes. “Christina?” he asked, and she nodded. “That took a lot of courage,” he said with a dramatic sigh.

Last week Whit found a safety pin in the kitchen. I don’t know why it was there, but that’s just the kind of mom I am! (see also: falling down stairs, tumbling out of shopping carts, and being bitten by dogs). Anyway, he was playing with it, clearly fascinated, and asked me what this marvelous device was called.

“A safety pin,” I said. He was silent and kept clicking it open and shut. About thirty minutes later we were donning coats, hats, mittens (the joy of the morning routine in the New England winter can’t be overstated) and Whit was still clutching the safety pin.

“Whit, you aren’t taking that to school,” I said to him.

“Then why is it called a safety pin?”

Yesterday morning as we sat at school waiting for the classrooms to open, I had Grace on one side of me and Whit on the other. Absently, I said, “What do you guys want to talk about?”

I was impressed. I felt tears prick my eyes. My little sensitive soul. Moments later he was bouncing my foot with his, with increasing vigor, basically kicking my sneaker with his boot.

“Whit! What are you doing?” I asked him.

“What do you feel, Mummy? Do you feel pain?”

Ah. Those feelings are the ones he wanted to talk about.

8 thoughts on “Whit: wit and wisdom”