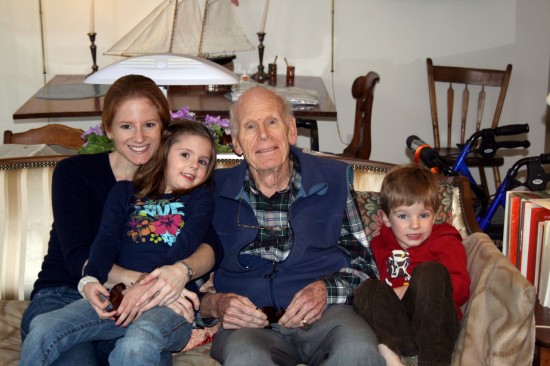 Yesterday we visited my grandfather for lunch and a swim. Pops is about to turn 92. He is, truly, a force of nature. His apartment is full of models of both boats and rockets, books, family pictures, and two computers. He was – is! – an engineer and participated in some of the truly exciting projects of the 20th century, including Apollo XI. Pops is my last remaining grandparent and it is a great joy to me that my children know him and feel such affection towards him. He is “great-Pops” to them and is greeted with much enthusiasm and many full-body hugs.

Almost two years ago, on the eve of his 90th birthday celebration, I wrote a post called “A Great Man,” which was about and for Pops. It is all still true. 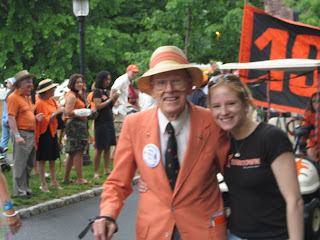 “From the first he loved Princeton – its lazy beauty, its half-grasped significance, the wild moonlight revel of the rushes, the handsome, prosperous big-game crowds …” – Fitzgerald, This Side of Paradise

Tomorrow is Pops’ 90th birthday celebration. Wow! What an icon this man is. I know there will be Princeton talk, possibly some handing down of orange paraphernalia, and tears. From the first time I saw Princeton, Labor Day 1991, with Dad, I have loved it too. And the whole time, from day one until now, my love affair with Princeton has been intertwined with Pops’ own deep connection to the place. His experience and mine were radically different, and yet we both came away with intense commitment to and affection for the place. In my mind this is central to Princeton’s power: it is a place that can be both wildly various and fundamentally singular.

I’m struggling right now to write a birthday card to Pops, to put into words what he means to me. This man, blisteringly intellectual, stubborn and passionate about his hobbies and interests, more brave and curious at 90 than I am at 33. Who got onto a steamer ship in his mid teens to come to the Hill School as a boarding student from his home in China. Who to this day remains fluent in Mandarin, who uses email and makes ship models from tiny pieces of balsa wood. Who reads and travels voraciously, who is a consummate adventurer. His Christmas card last year was a photograph of himself hanging from a zip line, high in the trees, in Costa Rica. Who never misses a Princeton reunion. I am grateful that I was there in 2006 to walk with him in his first P-Rade as an official member of the Old Guard.

Notably, Pops’ old age has softened him – a man that I recall as being intimidating and slightly aloof has become one who chokes back tears at toasts and who drove long distances to meet my children as soon as they were born. I remember the spring of my freshman year I made him a frame with several photographs of campus, and a handwritten rendering of the quotation above. It was for his birthday, then, 1993 – it must have been his 75th, I realize how. I remember still the short personal note I wrote, and it remains true now: “It is an honor and a privilege to share the legacy of Princeton with you.”

9 thoughts on “A visit with great-Pops”