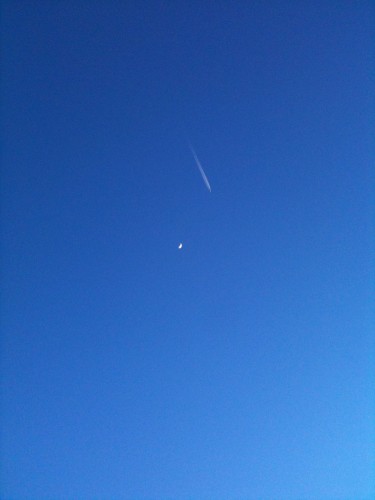 I love this picture that I took a few days ago of the heartbreakingly clear blue sky with the moon and a plane. I love it. I’m moved by seeing man’s boldest, bravest gamble (to fly!) juxtaposed with the moon, which represents (to me) the timeless, ever-turning nature of the universe. By the contrast between the linear motion of an airplane and the cyclical motion of the moon and the planets. Straight lines and circles. Forward and around and backward: time folding in on itself, time present echoing time past and foreshadowing time future. All in the cornflower blue sky that is probably my favorite color.

It has been a quiet few days for me, without a lot of sleep. The sadness and loneliness that walk with me every day are a persistent undertow, and I struggle to stay upright. I walked with Grace and Whit down to the drycleaner today in the afternoon’s full sunshine. It strikes me that the same tension existed in that moment as I see in the photograph above. As my children ran straight down the street, straight into their futures, their laughter seeming to echo off of the barren trees I was painfully aware too of the unrestricted, repetitive circling of my own mood, my own thoughts clear standing water to muddied, restless eddies. As we walked, the straight, irrevocable line of time scraped against the circular, non-rational loops of my spirit. As is often the case, there was pain in the scraping, and a little bit of blood drawn.

On Monday afternoon I ran in what can practically be called a monsoon. It was pouring. The kind where you are soaked to the skin just in the walk from your car to your door. It was also warm, which meant that the snow had been melting and there were deep puddles. I was ankle-deep in dirty water by the time I’d hit a quarter mile. The sidewalks were murderously slippery: a few tenacious strips of snow, packed to a dirty translucence that resembles ice, hid under the running water. I almost wiped out several times. Once again, my body moved forward in a straight line, my breath and footsteps both beating a regular cadence, but my mind ran its endless, convoluted circles.

The contradiction between time’s relentless linearity and the irregular, swooping arcs of my heart and mind is a theme of my life.  They even exist, held together in their opposition and duality, in the body of every woman: we are defined by the arrow-straight path from birth to death and also by the cyclical nature of the various bodily processes that allow us to bear life.  The challenge for me is not letting there be too much tension between the two rhythms, but learning to let them coexist as peacefully as possible.

11 thoughts on “Linear and cyclical”